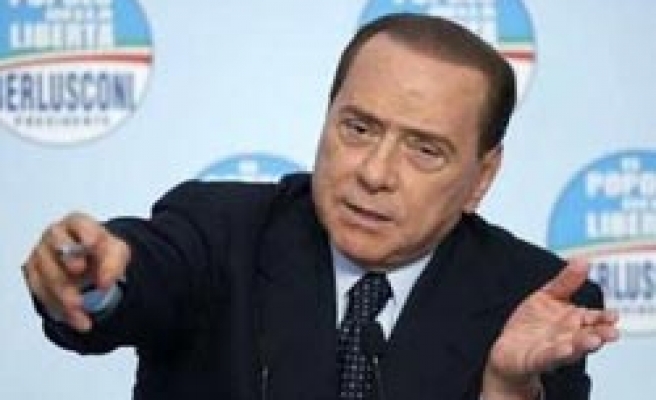 Prime Minister Silvio Berlusconi's main coalition ally said early elections were the only way out of Italy's political crisis, as the premier and his estranged partners engaged in an acrimonious war of words.

Berlusconi has challenged former ally Gianfranco Fini's breakaway group to back a five-point programme at a confidence vote next month or face a vote by December.

Fini's camp retorted at the weekend that it would not accept ultimatums.

Umberto Bossi, the outspoken leader of the separatist Northern League party in the ruling coalition, said Italy should now head to the polls, no matter what the outcome of September's confidence vote.

"Berlusconi has said that he has a programme to put to parliament. If they vote in favour, good. Else we go to the polls," Bossi was quoted as saying by newspapers on Sunday.

"I think we must to go the polls either way. It seems unlikely that things can continue like this."

Bossi, whose party is expected to make gains in its home base in Italy's north if elections were held now, later told the SkyTG24 news channel that an election should be held without delay.

Long-simmering tensions between Fini, the lower house speaker, and Berlusconi culminated in a dramatic split last month that has tipped Italian politics into turmoil.

Fini commands the support of 34 deputies and 10 senators, without whom Berlusconi does not have a guaranteed majority in parliament.

Verbal sparring between the rival camps escalated over the weekend after Berlusconi was quoted as saying by party members that his five-point agenda was not negotiable and that Fini's group could "take it or leave it".

Fini's supporters -- who initially welcomed the 10-page programme of measures but were reported to have expressed doubt on some of the judicial reforms included -- responded angrily.

"Berlusconi's logic belongs to business circles, not politics," Italo Bocchino, one of Fini's top aides, said in an interview published by La Stampa daily on Sunday.

"We can't accept being asked to give 100 percent support to a programme that we haven't been called to discuss, and which contains things that are not related to the programme."

He warned that the split between the two sides looked irreparable and suggested Fini's group could form a new political party.

Berlusconi last week said surveys he had seen indicated his People of Freedom party and the League could expect to win more than 50 percent support.

Bocchino, however, said the polls suggested Berlusconi's party would lose seats in the lower house to the League and Fini's group and lose its majority in the Senate.