PM Berlusconi issued a challenge to his rivals, saying Italy would have to go to the polls by the end of the year if his troubled centre-right government loses a confidence motion next month. 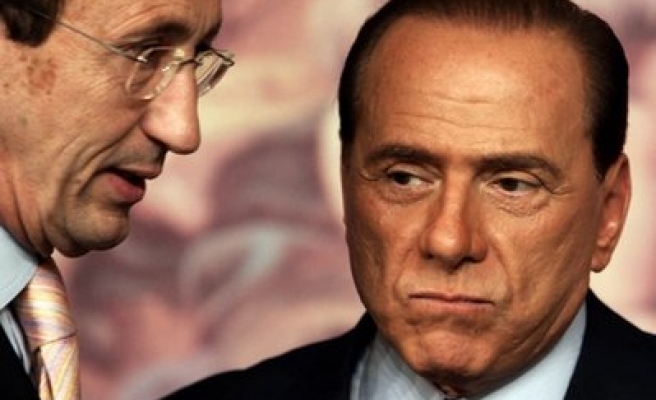 Prime Minister Silvio Berlusconi issued a challenge to his rivals on Friday, saying Italy would have to go to the polls by the end of the year if his troubled centre-right government loses a confidence motion next month.

Berlusconi no longer enjoys a guaranteed majority in parliament after a dramatic split last month with his former ally Gianfranco Fini, the powerful lower house speaker who commands the support of 34 deputies and 10 senators.

The prime minister intends to call a confidence vote when parliament resumes in September, defying his conservative rivals to fall into line or push the country into elections which would otherwise not be due until 2013.

If he loses the confidence motion on a five-point programme of measures from tax reform to helping the underdeveloped southern regions of Italy, President Giorgio Napolitano would either try to appoint another government or call an election.

Berlusconi dismissed the possibility of an interim government appointed by the president and said a snap poll would be the only realistic possibility.

"I do not think there would be any alternative for the good of the country," he told reporters after a meeting with senior leaders from his People of Freedom party in Rome.

He read out a 10-page programme of lower taxes, a reform of the justice system ensuring quicker trials, more financial autonomy for the regions and a crackdown on organised crime, and defended the government's handling of the economic crisis.

Asked whether the election would have to be held by the end of the year, he said: "Absolutely, yes. Anything else would be wasting time and very negative for the country."

He said surveys he had seen indicated the People of Freedom and its coalition partners in the Northern League could expect to win more than 50 percent support.

"We will support the government"

Fini's supporters, however, appear unwilling to trigger early polls and Italo Bocchino, one of Fini's main lieutenants, said Berlusconi had offered no surprises and his group would not vote against the prime minister.

"We will vote for this programme and support the government," he was quoted as saying on the website of the newspaper Corriere della Sera, adding that the measures mostly corresponded with proposals by Fini himself.

The long-standing rivalry between the two leading figures of the Italian centre-right has come to a head over a series of corruption scandals, which forced two ministers and a junior minister to resign.

Following the split last month, the summer lull provided a break in hostilities, with the rival camps reduced to a sour exchange of jibes and accusations through the media, but Berlusconi's declaration has opened a new phase in the battle.

Fini has used his position as speaker of the lower house to keep up a barrage of criticism as one Berlusconi ally after another has come under pressure from magistrates investigating accusations of graft and political influence-peddling.

His attitude and his insistence on the need for ethical standards has enraged Berlusconi and few believe a reconciliation in the conservative camp is possible.

Pier Luigi Bersani, head of the opposition Democratic Party, accused Berlusconi of telling "fairy tales" and said he was incapable of continuing but the chronically divided centre left has posed little threat to the government so far.