"We have decided, not without some internal strife, to support the government," the media tycoon told the Senate at the end of a sometimes fiery debate. 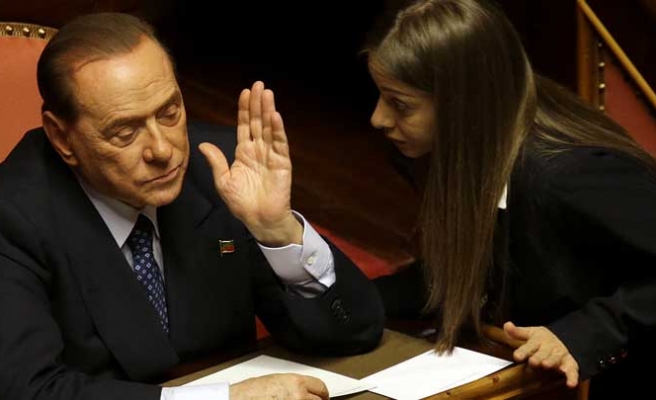 Italian centre-right leader Silvio Berlusconi promised to support Prime Minister Enrico Letta in a confidence vote on Wednesday, staging a U-turn only days after he provoked a crisis by pulling his ministers out of the government.

Berlusconi abruptly changed course as dozens of rebels in his centre-right People of Freedom partyprepared to vote for Letta. "We have decided, not without some internal strife, to support the government," the media tycoon told the Senate at the end of a sometimes fiery debate.

His decision leaves Letta in office but opens a series of questions about the already fragmented Italian political landscape, including whether the coalition government will be able to operate normally and pass badly needed economic reforms.

Berlusconi's declaration capped a day that veered between high drama and what one centrist politician called a farce, as a flood of defections from his party persuaded the 77-year-old billionaire that there was no point in continuing resistance.

Financial markets, already buoyed by confidence that Letta would win, reacted positively. Shares on theMilan bourse rose nearly two percent and yields on 10-year government bonds fell to a low for the day of 4.34 percent.

Italy's European partners have watched with growing alarm as Letta's unwieldy coalition of left and right teetered on the edge of collapse, with Berlusconi declaring war on the government following moves to expel him from parliament for tax fraud.

Berlusconi's furious decision to withdraw his ministers from the coalition provoked the mutiny in the PDL, with dozens of Senators defying orders and declaring they would vote for the government.

As the debate on the confidence motion opened, Letta said Italy risked being left without a stable government if his administration fell.

"Italy is running a risk that could be fatal, without remedy. Thwarting this risk, to seize or not seize the moment, depends on the choices we will make in this chamber. It depends on a yes or a no," he told the Senate.

Letta said the government would continue with tight control over public finances and a focused programme of economic reforms. It was vital that Italy had a stable government in 2014 when it assumes the rotating presidency of the European Union, he added.

Berlusconi has been the undisputed leader of the centre-right for two decades and the PDL mutiny opens an unpredictable new chapter in Italian politics.

An opinion poll by the Ipsos institute conducted on Tuesday showed 61 percent of PDL voters felt the party should back Letta and 51 percent that it should pick a new leader to take over from Berlusconi and renew the party.

Angelino Alfano, the 42-year-old PDL party secretary once seen as Berlusconi's heir, broke with his patron and called on the party to support the Letta government from which he himself had resigned as interior minister on Saturday.

Bitterness in the Berlusconi camp at the rebellion was underlined by a stark headline in the family-owned Il Giornale daily reading "Alfano betrays".

Uncertainty remains over whether Letta's government will be capable of the kind of deep reforms or painful tax and budget measures needed to reverse a decade of economic stagnation and cut its 2 trillion euro ($2.7 trillion) public debt.