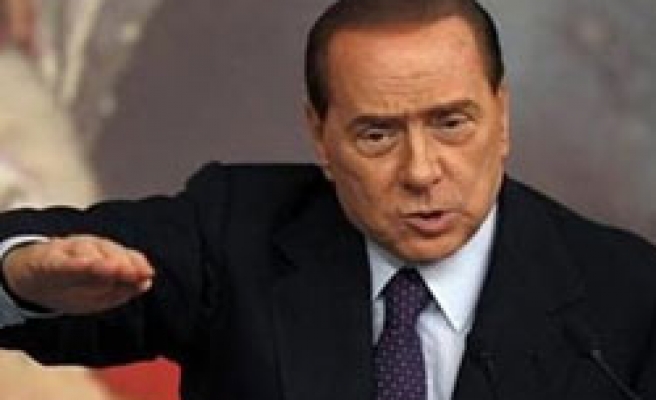 Prime Minister Silvio Berlusconi warned on Saturday that markets could punish Italy if growing tension in his ruling coalition results in the fall of his government.

Italy, whose public debt is among the highest in the euro zone, has so far been spared the kind of market volatility which has hit countries like Greece, Portugal and Spain, thanks largely to a restrained fiscal policy.

However, Berlusconi, speaking by telephone to a gathering of his People of Freedom (PDL) party in the central Italian town of Gubbio, said markets could take fright at the prospect of early elections or a change of government.

"We have to remember that we have hundreds of billions (of euros) of bonds to place, with 56 billion in the month of September," he said. "We mustn't forget that Italy could run the risk of a loss, or a partial loss of market confidence."

Berlusconi insisted he would serve a full term, due to end in 2013, despite months of speculation his government will collapse prematurely following a dramatic split with his former ally, parliamentary speaker Gianfranco Fini.

Fini, a co-founder of the PDL with Berlusconi, commands enough support from a rebel group of 34 centre-right deputies to topple the government if they voted with the opposition.

"There is no alternative to this government, we have the duty to carry on and to govern," Berlusconi said.

He made similar comments on Friday and appears to have moved away from the idea of seeking early elections to try to regain a solid parliamentary majority.

This strategy is vociferously supported by his main coalition partner, the pro-autonomy Northern League, and has at times appeared to be favoured also by Berlusconi.

Opinion polls suggest he retains enough support to beat the weak centre-left opposition, but would probably emerge weakened from any election held in the next few months.

Berlusconi, who is due to speak in parliament in the last week of September, has pinned the future of his government to a five-point programme of measures including reform of the justice system and giving regions more autonomy in tax matters.

While he has been fiercely critical of Berlusconi, Fini recently said he would not take any steps to cause the premature end of the government. Fini said he would vote in favour of a confidence motion as long as it upheld electoral pledges.