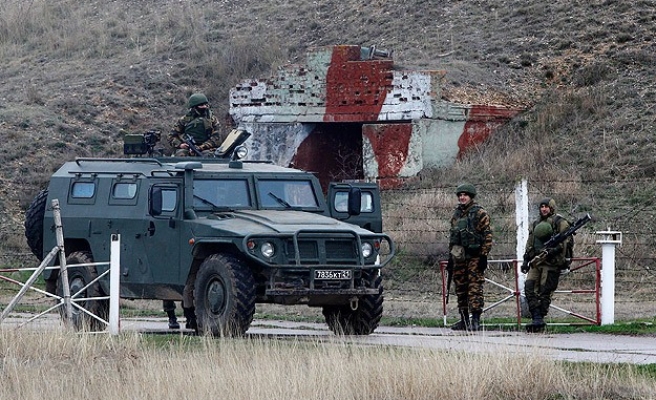 High-level diplomatic efforts to resolve the crisis in Ukraine made little apparent headway at talks in Paris on Wednesday with Moscow and Washington at odds and Russia's foreign minister refusing to recognise his Ukrainian counterpart.

"We agreed to continue intense discussions in the coming days with Russia, with Ukraine, in order to see how we can help normalize the situation, stabilize it, and overcome the crisis," Kerry told reporters.

"Don't assume that we did not have serious conversations which produced creative and appropriate ideas on how to resolve this, we have a number of ideas on the table," he said after talks with ministers from Ukraine, Russia, Britain and France.

Russia had earlier rebuffed Western demands that its forces that have seized control of Ukraine's Crimea region should return to their bases.

NATO, at a meeting in Brussels, announced it was cutting back on cooperation with Russia to try to pressure it into backing down on Ukraine and suspended planning for a joint mission linked to Syrian chemical weapons. The alliance said it would step up engagement with Ukraine's new leadership.

Ukraine's new finance minister, Oleksander Shlapak, caused a fall in the Ukrainian bond and currency markets by saying his economically shattered country may start talks with creditors on restructuring its foreign currency debt.

Russia and the West are locked in the most serious battle since the end of the Cold War for influence in Ukraine, a former Soviet republic with historic ties to Moscow that is a major commodities exporter and strategic link between East and West.

Ukraine pulled out of a trade deal with the EU under Russian pressure last year, sparking months of protests in Kiev and the Feb. 22 ouster of Yanukovich, a Russian ally.

Ukraine says Russia has occupied Crimea, where the Russian Black Sea fleet is based, provoking an international outcry and sharp falls in financial markets on Monday, though they have since stabilised.

Lavrov said discussions on Ukraine would continue, but he did not talk to Ukrainian Foreign Minister Andriy Deshchitsya, whose new government is regarded as illegitimate by Moscow.

As he left the Foreign Ministry in Paris, Lavrov was asked if he had met his Ukrainian counterpart. "Who is that?" the Russian minister asked.

Deshchitsya said he believed a "positive outcome" would emerge. Asked why he had not met Lavrov, he shrugged his shoulders and raised his eyebrows.

"We are happy that this meeting in Paris allowed us get things under way. We agreed to try to find a peaceful solution in the coming days to get out of this crisis ... something moved in the right direction."

A senior U.S. State Department official denied Russian reports that Moscow and the Western powers had agreed that the Ukrainian government and opposition should to stick to a European Union-brokered peace deal.

"There were no agreements in this meeting, and there never will be without direct Ukrainian government involvement and absolute buy-in," the official said.

Wednesday's talks in Paris were an effort by France to capitalize on the presence of major power foreign ministers in the French capital for a long-scheduled meeting on Lebanon.

A first attempt to get Lavrov and Deshchitsya together at the Elysee Palace of President Francois Hollande failed, as did a subsequent attempt at the Foreign Ministry.

Meetings involving the foreign ministers of France, Russia, the United States, Poland, Germany, Poland and Ukraine took place in various combinations during the day, but never with the Russian and Ukrainian ministers in the same room together.

Earlier, Lavrov repeated Moscow's assertion - ridiculed by the West - that the troops that have seized control of the Black Sea peninsula are not under Russian command.

Asked whether Moscow would order forces in Crimea back to their bases, Lavrov said in Madrid: "If you mean the self-defence units created by the inhabitants of Crimea, we give them no orders, they take no orders from us."

A U.N. special envoy had to abandon a mission to Crimea after being stopped by armed men and besieged inside a cafe by a hostile crowd shouting "Russia! Russia!" Dutch diplomat Robert Serry flew to Istanbul after the incident.

In a sign of heightened tensions in eastern Ukraine, a pro-Russian crowd in Donetsk, Yanukovich's home town, recaptured the regional administration building they had occupied before being ejected by police.

The West is pushing for Russia to return troops to barracks, accept international monitors in Crimea and Ukraine and negotiate a solution to the crisis through a "contact group" probably under the auspices of a pan-European security body.

Britain said it would join other European Union countries in freezing the assets of 18 Ukrainians suspected of misappropriating state funds, and Canada announced economic sanctions on senior members of the government of ousted President Viktor Yanukovich.

France said EU leaders meeting in Brussels on Thursday could decide on sanctions against Russia if there is no "de-escalation" by then. Other EU countries, including Germany, are more reticent about sanctions.

President Vladimir Putin on Tuesday defended Russia's actions in Crimea, which used to be Russian territory, and said he would use force only as a last resort.

This eased market fears of a war after sharp falls on Monday, though Russian shares and the rouble slipped again on Wednesday, and Ukraine's hryvnia dropped against the dollar.

Defense Secretary Chuck Hagel told Congress on Wednesday the U.S. military was stepping up joint training through an aviation detachment in Poland and boosting participation in a NATO air policing mission over the Baltic states, Estonia, Latvia and Lithuania - the only former Soviet republics that are members of the Western alliance.