Biggest international aid convoy to Gaza sets off from London

London-based activists, including two survivors of deadly Israeli raid on a flotilla on May 31, has organised biggest international aid convoy to Gaza. 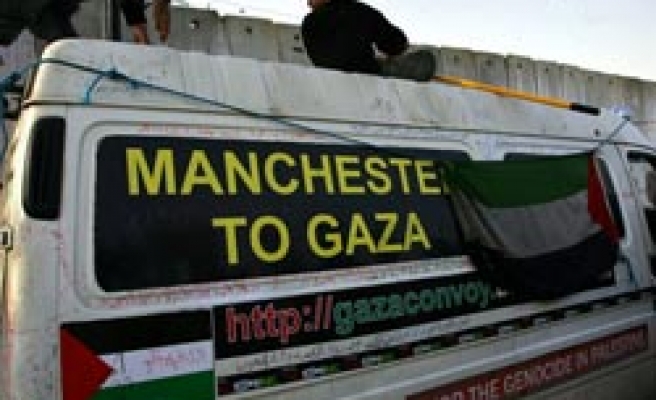 London-based activists, including two survivors of deadly Israeli raid on a flotilla on May 31, has organised biggest international aid convoy to Gaza scheduled to Saturday.

Two other convoys were being organized at the same time from Casablanca, Morocco, and Doha, Qatar, his group said.

Two survivors of the Mavi Marmara massacre, Nicci Enchmarch and Kevin Ovenden, are among the activists taking part, aiming to break the Israeli siege of the territory and deliver crucial relief supplies.

The survivor activists will lead the Viva Palestina Lifeline 5 land convoy of 200 vehicles carrying medical supplies, learning aids and materials to build a maternity facility in northern Gaza, a mosque and a school for orphans.

The three convoys with between 150 and 200 vehicles will then meet in Latakia in Syria before being shipped past the point at which the Mavi Marmara was attacked down to the Egyptian port of El Arish before crossing into Gaza via the Rafah Crossing, they said.

The incident drew international outrage and badly shook a wide-ranging military and diplomatic alliance between the Jewish state and Turkey.

A Syrian ship with 650 tons of humanitarian aid, offered by Syrian people, on board set off in the same day from Tartous harbor to Gaza Strip, according SANA.

Gazans live under heavy Israel siege for a long time and Egypt still insists on not to opening the only Gaza border crossing in a move condemned by Muslims around the world in protests.

Chairman of the Syrian Red Crescent Organization Abdulrahman al-Attar hoped the aid will find its way to Gaza as soon as possible to ease the plight of the Palestinians there as a result of Israel's unjust siege on Gaza.

But Israel imposes heavy blockade on entry of infrastracture materials under the pretext of Palestinians can use them as "weapon" materials.