Tony Blair said he was considering cancelling a book-signing in London this week to mark the launch of his memoirs, over fears the event would be hit by anti-war protests. 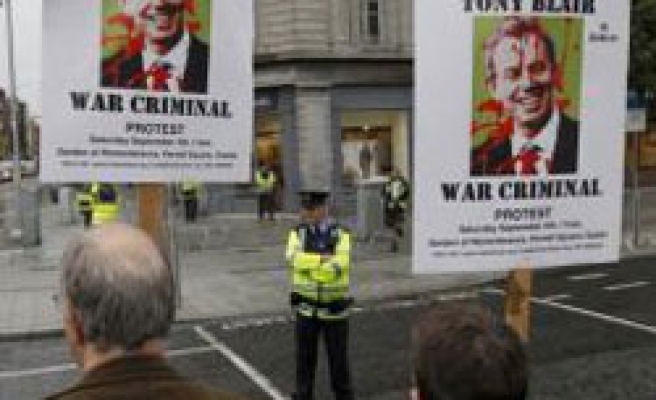 Tony Blair said on Monday he had cancelled a book-signing in London this week to mark the launch of his memoirs, over fears the event would be hit by anti-war protests.

Three activists were arrested after eggs and shoes were thrown at Blair, 57, as he arrived to sign copies of "A Journey" at a bookshop in Dublin on Saturday and some of the 200 protesters clashed with police.

No injuries were reported and the missiles did not hit Blair.

Anti-War campaigners and the far-right British National Party have said they would now protest on Wednesday at the Waterstone's branch in Piccadilly in central London over Blair's decision to join the U.S.-led invasion of Iraq in 2003.

"I have decided not to go ahead with the signing as I don't want the public to be inconvenienced by the inevitable hassle caused by protestors," Blair said in a statement on his website.

Tight security was already planned for the event. Waterstone's said all bags and mobile phones would have to be checked in beforehand. Those attending have also been told not to try to solicit any personal messages.

In his memoirs, Blair -- now an envoy for the Quartet of Middle East peacemakers, the United States, Russia, the EU and the United Nations -- said he could have not have imagined what he called the "nightmare" that unfolded in Iraq.

A group set up on the social networking site Facebook is calling for people to move copies into the "crime" section of bookstores.

"Make bookshops think twice about where they categorise our generations (sic) greatest war criminal," said the campaign, which has attracted almost 7,000 members.