Israeli Anti Apartheid week got kicked off to a start with pro Palestinian activists plastering London trains with anti-Israel ads with many targeting G4S the security firm and the BBC which remains firmly biased towards Israel. 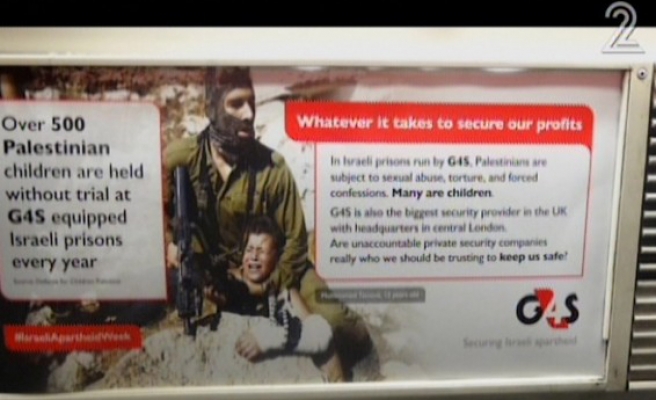 Millions of Londoners were exposed on Monday to a number of anti-Israel posters on the underground network to mark the beginning of the Boycott, Divestment and Sanctions (BDS) movement’s 12th annual Israeli Apartheid Week. In response, Israel has asked the UK to remove the pro-Palestinian posters.

The city's transport authority said the posters were unauthorized and would be removed, and that they wer "fly posting and therefore an act of vandalism which we take extremely seriously," a spokesman for Transport for London said, according to the Evening Standard website.

The posters were hung by London Palestine Action, a pro-Palestinian activist group, which said it was part of their Israeli Apartheid Week campaign.
“It’s to highlight the illegality of Israel’s occupation of Palestine and the involvement of British companies there,” one of its activists said.

Quite a few of the posters were aimed at the BBC, which activists say is biased in favor of Israel. Several included mock-ups of BBC reports as well as targeting G4S security company which operates some prisons in Israel and the West Bank, according to the Jewish Chronicle. The posters accused the firm of “securing Israeli apartheid” and doing “whatever it takes to secure profits.”

Yair Lapid, leader of the Yesh Atid party, described the ads as “anti-semitic, anti-Israel signs calling us an apartheid state, accusing us of torturing children, or murder, of terrible things.” He reportedly phoned London Mayor Boris Johnson that the ads would not tolerated by the Israeli government. Johnson assured Lapid that the signs would be taken down. He complied late Tuesday afternoon and the posters have now been removed.

Netanyahu  who was accused of doing nothing said that "I spoke earlier with |Foreign Ministry Director General Dori Gold, who is in London, and asked him to demand from the British government that the posters be removed," he told a meeting of his party's Knesset caucus, according to a report in Maariv.