Asked why Britain did not send in its elite Special Air Service (SAS) unit to rescue Henning, Foreign Secretary Philip Hammond said: "We don't know where he is, it's as simple as that." 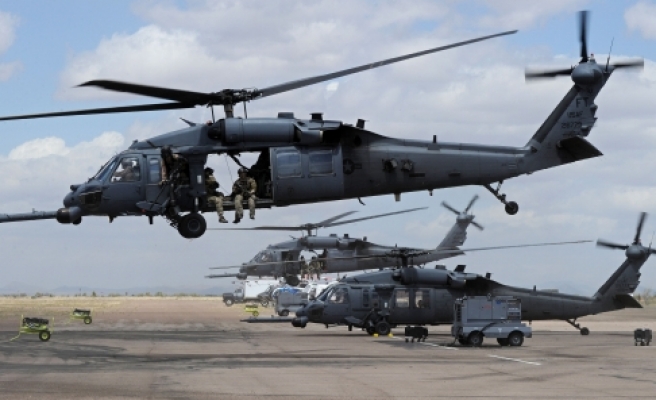 Britain ruled out a mission by special forces to rescue a Briton whose life was threatened in the latest execution video released by ISIL militants, saying on Monday it did not know where he and other hostages were being held.

In the video released on Saturday, militants threatened to kill taxi driver Alan Henning if British Prime Minister David Cameron continued to support the fight against them.

The group has already killed another British hostage and two Americans which have provoked revulsion around the world, using the tactic to put public pressure on Western governments after U.S. air strikes helped halt the ISIL advance after it swept through northern Iraq.

Asked why Britain did not send in its elite Special Air Service (SAS) unit to rescue Henning, Foreign Secretary Philip Hammond said: "We don't know where he is, it's as simple as that."

"Obviously if we knew where he was we would look at all sorts of options," he told the BBC from Paris following a meeting to coordinate a European response against ISIL.

"We've considered every possible option to support these kidnap victims, both British and others, and if we knew where they were it would be a different story, but we don't know."

Henning, a father-of-two from Salford in northern England who was so moved by the plight of Syrians he had "aid for Syria" tattooed on his arm, was part of a humanitarian mission which set off just days before Christmas last year to take medical equipment to the war-torn country when he was taken hostage.

"I remember going on two convoys with him, at the end of 2012 and in May 2013, and he was always very positive and very interested in the work," said Mohamed Elhaddad, a director of the UK Arabic Society who has led convoys to Syria.

"But Alan went too far into Syria. He took that extra risk, because he could have accomplished the drop-off at the border. Alan is my friend, this is extremely sad for him and his family. It is a very sad situation."

Henning was captured not long after his aid convoy was halted by masked gunmen shortly after they crossed the border from Turkey, and the 47-year-old was taken away from the others, media reported.

"They put everyone in a room and started to question people," a fellow aid worker told the Times newspaper. "They were a mixture of Libyans and Algerians and they gave Alan a hard time because he was not a Muslim."

According to Dutch journalist Harald Doornbos, Henning was captured by ISIL fighters and taken first to Idlib and then moved to Raqqa.

"I interviewed in jan 2014 Syrian man who was prisoner in ISIS-jail in Ad-Dana (Idlib) when ISIS brought in UK man he named as Alan Henning," he wrote on his Twitter feed.

British security sources confirmed Henning had been captured in Syria but gave no further details. The Foreign Office said it would also not comment on the circumstances.

Officials will not divulge the number or nationality of hostages taken in Syria for fear of putting their lives at risk. The U.S. military tried to rescue journalist James Foley and other American hostages before Foley was killed but the attempt failed because they were not at the targeted location.

"BEST OF THE BEST"

The Bolton News, a local paper in northern England which had reported on the departure of the convoy Henning was in, said the party had been made up of some 20 vehicles and had been heading to a hospital in Idlib, in northwest Syria.

The paper said it was believed Henning was captured just 30 minutes after they had crossed the border from Turkey.

"Alan is an amazing guy. He is the best of the best," fellow aid worker Kasim Jameel, who had travelled with Henning to Syria, told the paper.

"He loved the cause so much that when he went to Turkey on holiday with his family, he had a big tattoo across his arm saying 'aid for Syria' - he was that dedicated. The cause had literally changed his life around - it meant that much to him."

Henning also briefly featured in a BBC documentary which followed an earlier convoy, with footage of him packing ambulances and vans with diapers and food.

Catrin Nye, a BBC documentary maker who spoke to Henning, known to his friends on the trips as "Gadget" because of his technical skills, said he had been very affected by a trip to a Syrian refugee camp, calling it a life-changing experience

"He was a very likeable man, funny, very kind and friendly. When I questioned him on why he was going on such a dangerous mission ... he said he had been inspired by friends who had been to Syria," Nye told BBC television.

One aid worker, who travelled on a previous convoy with Henning, told Reuters he had been motivated by the inaction of the British government.

"He thought he could try and do what he could," said the volunteer, who declined to be named. "He was very good, very jolly. I got on with him really well and he seemed to get on with everyone else."

Since the outbreak of fighting in 2011 which has claimed more than 191,000 lives according to the United Nations, many similarly small locally organised aid missions have left Britain to take food and equipment to Syria.

However, in recent months police and politicians have actively tried to dissuade people from travelling, saying not only are their lives at risk but there was a danger they could be radicalised.

Those who do go now risk arrest as Britain steps up attempts to deal with those who have gone to join the fighting over fears they might have joined militant groups such as ISIL.

The aid worker who spoke to Reuters said there were far fewer convoys now as people could now donate to charities which send medical aid and food.

"At that point, I don't think that was happening," he said.

While Britain desperately tries to locate Henning, the Daily Mail newspaper reported that his sister had tweeted a month ago they were planning to celebrate his birthday on his return.

"Happy 47th Birthday to my little bro Gadget/Alan Henning," the message from Gill Kenyon said, according to the Mail. "Can't wait to have a party on your return. Love you bro xx."