UKIP's success highlighted the threat it poses to PM Cameron in a national election in May 2015 and its ability to split the mainstream Conservative party's vote. 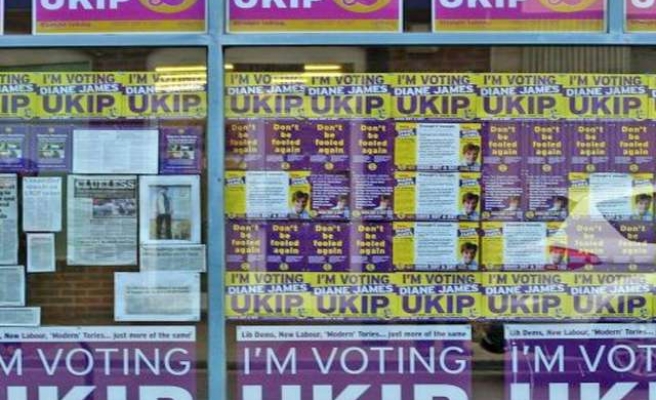 Prime Minister David Cameron's Conservatives lost a second parliamentary seat to the anti-EU UKIP party in Britain on Friday, an embarrassing defeat that foreshadows a possible political upheaval in next year's national election.

With distrust of mainstream parties and anxiety about immigration rising, UKIP, the UK Independence Party, comfortably beat Cameron's party in a special election in the southeast English constituency of Rochester and Strood six months before what is shaping up to be a closely-fought national vote.

"Rochester and Strood was our 271st most winnable seat," Mark Reckless, UKIP's winning candidate, said after the results were announced. "If we can win here we can win across the country."

Cameron's right-leaning Conservatives and the opposition left-wing Labour Party are facing simultaneous challenges from UKIP and Scottish nationalists that could revolutionise a two-party system in place since 1945.

The victory for UKIP, which favours an immediate British EU exit and sharply lower immigration, will unsettle businesses, investors and European partners who fear Britain could be slipping towards an exit from the European Union.

Comments by Reckless immediately after his win will do little to steady those nerves.

"If you believe that the world is bigger than Europe, if you believe in an independent Britain then come with us and we will give you back your country," he said, to prolonged applause from supporters.

Reckless was a Conservative lawmaker until he became the party's second parliamentarian to defect to UKIP in September triggering Thursday's vote. His new party hopes his electoral success will spur other defections.

Reckless won 16,867 votes or just over 42 percent of the vote, giving him a majority of 2,920, less than opinion polls of voter intentions had suggested but still a comfortable win.

Cameron's Conservatives, who won the seat in 2010 with a majority of almost 10,000, came second with 13,947 votes despite mobilising all their resources to try to hold the seat.

Labour, which on Thursday night found itself embroiled in an awkward scandal after one of its senior lawmakers was accused of sneering at working class voters, came third with 6,713 votes.

The biggest loser from Thursday's vote was Cameron.

UKIP's success highlighted the threat it poses to him in a national election in May 2015 and its ability to split the mainstream Conservative party's vote.

Grant Shapps, the Conservative party chairman, said his party was disappointed by the result. But he said the margin of UKIP's victory was not as resounding as some had predicted giving his party a chance of winning it back in next year's national election.

"UKIP have taken seats from the Conservatives but all that does is make sure that Labour is in office and what that will mean is ... higher taxes, more borrowing, uncontrolled immigration and welfare," she told Reuters.

The loss is a blow to Cameron's own authority after he ordered his party to "throw the kitchen sink" at the contest to try to hold Rochester and visited the area five times himself before Thursday's ballot.

Labour is talking up the possibility of a leadership challenge against Cameron from within his own party. There is no evidence that such a challenge is imminent. If it did occur analysts believe Cameron would survive but be damaged.

Cameron's main rivals Labour have their own problems, with polls showing they may be wiped out next year in Scotland, a stronghold for generations, where the separatist Scottish National Party has surged despite losing a pro-independence referendum in September.

Labour controlled much of the Rochester constituency before 2010 and its poor showing could resurrect internal party grumbling about the performance of its leader Ed Miliband.

Cameron once described UKIP as full of "fruitcakes, loonies and closet racists". But the party won European elections in Britain in May and has transformed itself into a professional campaigning force, with telegenic leader Farage known for meeting voters in pubs with a pint of beer.

Cameron tried to neutralise UKIP by promising to renegotiate Britain's EU ties before holding an "in-out" referendum on membership in 2017. But he has yet to spell out exactly what changes he wants or forge strong alliances with EU partners to win them. His strategy has alarmed some EU allies.

Opinion polls show the Conservatives are narrowly behind the opposition Labour party with around 32 percent of the vote nationwide. UKIP currently stand at around 15 percent.