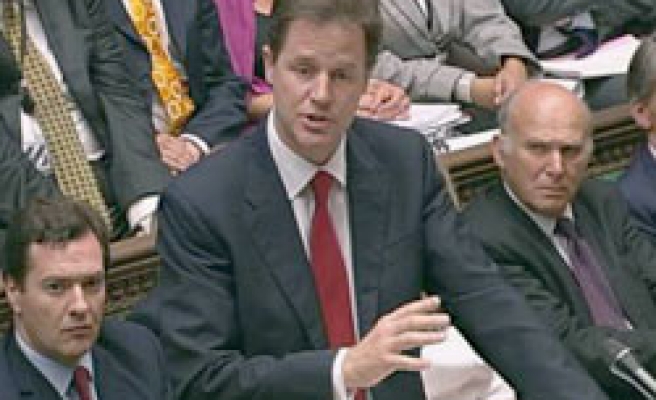 Deputy Prime Minister Nick Clegg Wednesday called the US-led invasion of Iraq "illegal" while standing in for Prime Minister David Cameron at the House of Commons for the first time.

Clegg, a long-time opponent of the war, was replacing Cameron at Prime Minister's Questions, the weekly showpiece question-and-answer session with lawmakers, while the prime minister visited the United States.

In exchanges with Jack Straw of the opposition Labour party, who was foreign secretary when the occupation began, Clegg called on him to "account for your role in the most disastrous decision of all, which is the illegal invasion of Iraq."

"I am happy to account for everything that we are doing in this coalition government, a coalition government which has brought together two parties working in the national interest to sort out the mess that he left behind," Clegg said during the exchange.

"Maybe one day, and perhaps we'll have to wait for his (Straw's) memoirs, he could account for his role in the most disastrous decision of all, which is the illegal invasion of Iraq," he added.

However, Cameron supported the British invasion role, as did most of his Conservative party, which is now in a coalition government with Clegg's Liberal Democrats.

Downing Street insisted the comments were not government policy.

"The coalition government has not expressed a view on the legality or otherwise of the Iraq conflict," its spokesman said.

"But that does not mean that individual members of the government should not express their individual views."

An inquiry headed by former civil servant John Chilcot is looking into the Iraq war, but its goal is to "learn lessons from the invasion" and not to rule on its legality.

Britain has withdrawn its troops from Iraq invasion but has 9,500 soldiers occupying Afghanistan. A rising death toll there is leading to increased public opposition to the invasion.