Cameron, Miliband and Liberal Democrat Leader Nick Clegg will all visit Scotland in what nationalist leader Alex Salmond said was a sign of panic that could backfire. 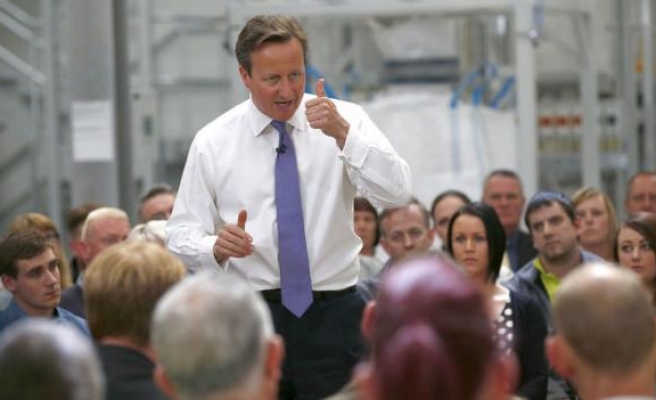 Prime Minister David Cameron begged Scots on Wednesday not to rip apart Britain's "family of nations", visiting Scotland in an attempt to stem a steep last minute rise in secessionist support ahead of a Sept. 18 referendum on independence.

In a sign of new panic in the British ruling elite over the fate of the 307-year-old union, Cameron and opposition leader Ed Miliband scrapped their weekly question-and-answer session in parliament to speak at separate events in Scotland.

"We do not want this family of nations to be ripped apart," Cameron, 47, said in an opinion piece published in the Daily Mail newspaper. "The United Kingdom is a precious and special country."

The prime minister, whose job may be on the line if he loses Scotland, tempered the emotion with a clear warning: "If the UK breaks apart, it breaks apart forever."

Cameron has until now been largely absent from the debate after conceding that his privileged background and centre-right politics mean he is not the best person to win over Scots, who returned just one Conservative lawmaker out of 59 in 2010.

Given the unpopularity of the Conservatives in Scotland, Cameron's trip is fraught with danger: if Scots vote for independence, Cameron will be blamed just as Britain prepares for a national election planned for May 2015.

They spoke at rallies in major cities surrounded by supporters bearing "No" posters. But nationalist leader Alex Salmond said the visits were a sign of panic that would only help the secessionist "Yes" cause.

"If I thought they were coming by bus I'd send the bus fare," Salmond said, describing Cameron as the most unpopular Conservative leader ever among Scots and Miliband as the most distrusted Labour leader.

In Edinburgh, independence supporter James Curry, 33, said he found the visits by politicians from London "insulting and patronising".

"They should've been up here ages ago. Instead, they're having a wee day trip, paid for by expenses," he said. "There's so much at stake, and it seems so real already, I just hope we make it."

Several opinion poll surveys have shown a surge in support for independence over recent weeks, discomfiting investors and raising the biggest internal challenge to the United Kingdom since Irish independence almost a century ago.

Following a vote for independence, Britain and Scotland would face 18 months of talks on how to carve up everything from North Sea oil and the pound to European Union membership and Britain's main nuclear submarine base at Faslane.

Other uncertainties include the course of the 2015 election, the structure of the United Kingdom, symbols of state such as the "Union Jack" flag and even the role of the monarchy.

With the fate of the United Kingdom in the balance and polls showing a swing among Labour voters to the independence camp, the referendum has electrified Scotland. On streets, in pubs and in meeting halls from the Highlands to the windswept islands of the Atlantic, independence is being debated with passion.

Bookshops are full of referendum guides and tracts for and against independence. The Scotsman newspaper published six pages of letters on the vote on Wednesday, equally split between yes and no, including some from English people and Scots in England.

Seeking to tap into a cocktail of historical rivalry, opposing political tastes, and a perception that London has mismanaged Scotland for decades, nationalists say an independent Scotland could build a wealthier and fairer country.

Unionists say independence would needlessly breakup the United Kingdom and usher in years of financial, economic and political uncertainty. They have warned that Scotland would not keep the pound as part of a formal currency union.

"If the UK lost Scotland, it would be diminished," said John Major, who served as Britain's premier from 1990 to 1997. "We face a constitutional revolution."

Cameron, the unionist campaign and the Labour Party have all been criticised for allowing the case for the United Kingdom to be overly negative, riven by divisions and coldly economic.

Major, 71, hinted at a much longer catalogue of mistakes, blaming the Labour government of Tony Blair for granting powers to a Scottish parliament, a step he said had stoked the drive for separation.

The nations of Britain have shared the same monarch since James VI of Scotland became James I of England in 1603. Formal union in 1707 created a single sovereign state, known today as the United Kingdom of Great Britain and Northern Ireland, which includes England, Northern Ireland, Scotland and Wales.