In an attempt to turn a trend that could herald the end of the United Kingdom, Britain's most prominent politicians scrambled to offer Scots more powers. 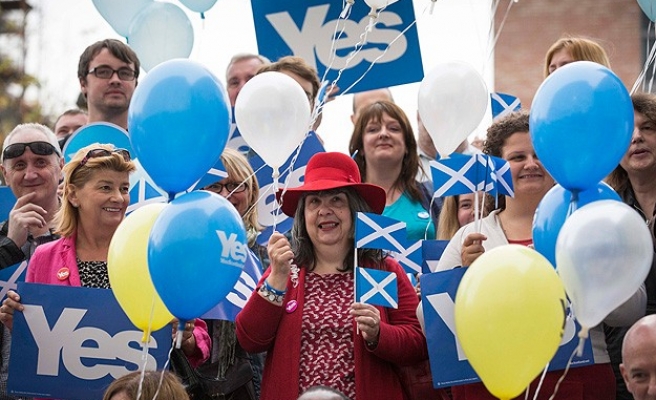 British Prime Minister David Cameron implored Scots on Tuesday not to vote for independence in next week's referendum after an opinion poll showed a surge in support for a break from the United Kingdom.

Cameron pledged to do everything he could to keep the United Kingdom together and said he would head north to Scotland to join the fray.

"In the end, it is for the Scottish people to decide, but I want them to know that the rest of the United Kingdom - and I speak as prime minister - want them to stay."

Cameron's move made clear that the break-up of the United Kingdom - previously thought to be a pipedream - was now a distinct possibility. His spokesman said Scotland's blue and white flag would be flown over Cameron's London residence in Downing Street on Tuesday.

Nationalist leader Alex Salmond said in Edinburgh that the TNS poll showed the campaign opposing independence had "fallen apart at the seams".

Britain's main political parties also scrambled to shore up the 307-year union by pledging more autonomy to Scotland, with former British Prime Minister Gordon Brown, a Scot, making an impassioned appeal to Labour Party supporters in central Scotland in support of staying together.

It followed a YouGov poll in the Sunday Times that put the pro-independence camp slightly ahead for the first time this year, prompting a fall in the pound and British shares that reflected concerns that an independent Scotland would struggle economically.

In a renewed blow to nationalist hopes of keeping the pound sterling, Bank of England Governor Mark Carney said a currency union between an independent Scotland and the remainder of the United Kingdom would be incompatible with sovereignty.

Britain's three main political parties have already ruled out a currency union with an independent Scotland, raising questions over what money Scots would use.

A split would also have huge ramifications beyond Scotland's borders, given Britain's current status as an economic, diplomatic and military power, a leading NATO and EU country, and a permanent member of the United Nations Security Council.

Salmond, who heads the Scottish National Party, the ruling party in Scotland, exulted in the poll news on Tuesday morning.

"I think this is a very significant day in the referendum campaign. This is the day that the no campaign finally fell apart at the seams," he told reporters.

He was speaking at an event with European supporters of Scottish independence, who posed on the steps of the St Giles Church on Edinburgh's historic Royal Mile holding signs saying "yes" in a variety of European languages.

Whether an independent Scotland would be allowed to remain a member of the European Union, as the independence movement wishes, has been a huge bone of contention.

Several prominent European politicians have said it would be impossible and Spain, which fears Scottish independence would give a boost to separatist movements in the Basque Country and Catalonia, is deeply opposed.

But a former president of the European parliament, Ireland's Pat Cox, said in the Scotsman newspaper that the EU was unlikely to send Scotland to the back of the queue for membership - not least because that would cause "chaos" in the fisheries sector if Scotland, with rich maritime resources, was expelled.

"It has always respected the expressed democratic will of the peoples involved," Cox said.

Speaking for the unionist campaign in a miners' welfare club in central Midlothian on Monday evening, Brown said discussions over further powers would begin the day after a "No" vote, with legislation put before the U.K. parliament by January 2015.

It would give the Scottish Parliament more power over welfare, finance, social and economic policy, he said.

"This moves us as close to federalism as we can," Brown said, showing more passion and charm than he ever did as prime minister. "Scotland is already a nation. We are proud of our history and culture. Do we want to sever all constitutional links with our friends, our neighbours, our relatives in England, Wales and Northern Ireland?"

Salmond said the offer was "a-back-of-the-envelope non-plan". But Brown's intervention was welcomed by Britain's three main political parties and a Downing Street source.

Cameron's job could be on the line if Scots vote for independence in the referendum.

The Old Etonian has been largely absent from the debate after conceding that his privileged background and centre-right politics mean he is not the best person to win over Scots, usually more left-wing than the English.

Following an independence vote, Britain and Scotland would face 18 months of talks on how to carve up everything from North Sea oil and the pound to European Union membership and Britain's main nuclear submarine base at Faslane.

The independence question has provoked impassioned debate in Scotland from boardrooms to street campaigns.

Proponents of independence say it is time for Scotland to run its own affairs and choose its own leaders rather than be ruled from London. An independent Scotland can use its North Sea oil revenue to create a prosperous and fairer society, they say.

Advocates of staying in the union say the country is stronger as part of a bigger entity and that going it alone would put it in a precarious economic position.

"I think the polls are behind the movement on the ground and are just catching up. There's definitely a mood swing," he said.

"We don't get the government we vote for and it's time we did. Small countries can be successful, create jobs and have a good economy. Look at the Danes and the Finns and all those places doing well."

He said he had lived in England and his son and daughter did now. "I don't need to be ruled by David Cameron to be friends with people in England."

David Black, a writer and historian, said he had been ready to vote "No" but changed his mind in February after British Finance Minister George Osborne "threatened to sabotage the economy" if Scotland voted "Yes".

"He lost a lot people in the middle there," Black said.