Bulgaria has charged three men as part of an organised crime group that was responsible for the deaths of 71 refugees in a truck in Austria. 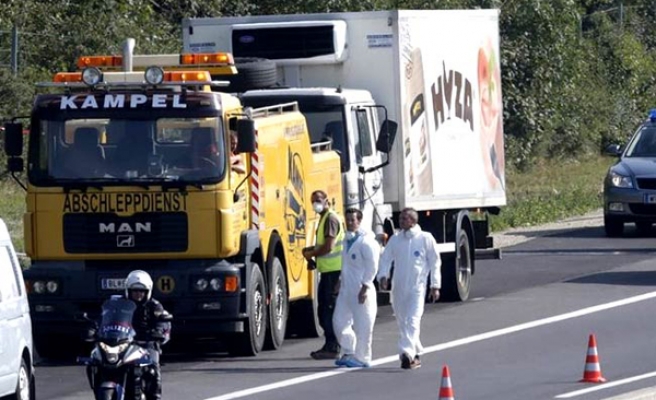 Bulgarian authorities said they have charged three men in connection with the deaths of 71 refugees whose bodies were found in an abandoned refrigeration lorry on a highway in Austria.

The Bulgarian prosecutor's office, in a statement, said that the three men were charged with being part of an organized crime group. One of the men, Tsvetan Tsvetanov, was arrested in Bulgaria on Monday and is believed by investigators to have been one of the drivers of the lorry.

A baby girl and three other children were among the dead crammed into the back of the lorry discovered on Aug. 27 on a highway from the Hungarian border to Vienna, where it had been dumped 24 hours earlier.

The other two men charged, Metodi Georgiev and Kasim Hasan Saleh, were arrested in Hungary last week on suspicion of human trafficking and are being investigated in Austria on suspicion of murder.

Four Bulgarians and one Afghan citizen are under arrest pending an investigation in Hungary. They face up to 16 years in prison for trafficking in Hungary plus murder charges in Austria.

A Bulgarian court said on Thursday that it will decide on Monday whether to extradite Tsvetanov, 32, to Austria.

He has been held under a European arrest warrant at his home in the Bulgarian town of Lom.

Tsvetanov has denied any wrongdoing.

The dead refugees included Syrian, Iraqi and Afghan nationals but none of the bodies has been identified, although there has been contact with people who claimed to be relatives of the victims, Austrian police said on Friday.