Local police said they were doing their best with limited resources. 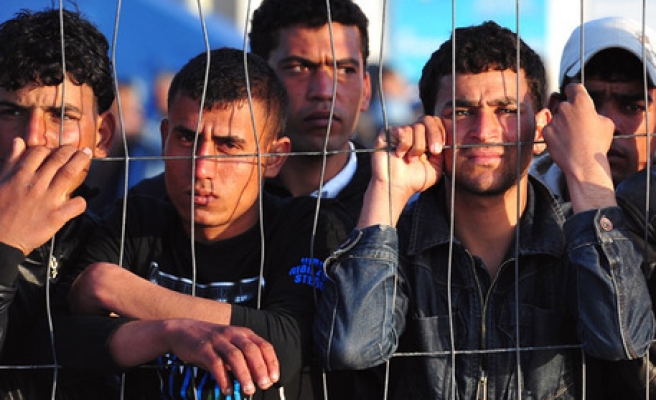 Illegal migrants in the French port city of Calais protested on Friday over what they said was police violence and worsening humanitarian conditions, days after a group was foiled in a bid to storm a ferry bound for Britain.

Calais has long been a magnet for illegal migrants trying to reach Britain. But local authorities say their numbers have shot up by 50 percent in recent months to around 1,300 as migrants flood into Europe fleeing humanitarian crisis in the Middle East, northern and eastern Africa.

Some 200 migrants in central Calais chanted "No to police violence" and held up signs reading, "Where are our human rights?"

"I've been here for only a few days but within these few days I have seen some inhuman things, like people who were beaten by police and harassment," said a 30-year-old Eritrean migrant named John, who asked not to be identified.

"Here, it's human chaos: no food at all, shortage of water, lack of medication."

Local police said they were doing their best with limited resources.

"The fact is that police are also suffering violence, with one colleague injured last Saturday," said Renaud Roussel, a member of the Alliance police union in Calais. "There are more than a thousand of them, so the police are under serious pressure right now to keep a lid on the situation."

Without formal accommodation, migrants living in makeshift camps dotted in and around the city have grown more desperate in attempts to board trucks, cars and boats to Britain, leading to increasingly violent clashes with police trying to stop them.

The violence - including street fights between rival groups of migrants - has led Calais' centre-right mayor Natasha Bouchart to call on Britain to stump up millions of euros in funding for beefed up security in the port area.

Migrants say they have little choice but to keep trying to reach Britain as Calais police expel them from one makeshift camp from another and beat those they catch on the run, while the city fails to provide for their basic needs.

On Wednesday, more than a hundred migrants managed to climb over a fence in the port area and tried to storm a ferry. They were only stopped from boarding when the ship brought up its boarding ramp at the last minute and crew used water cannon to turn the migrants away.

Earlier in the week, Eritrean and Sudanese migrants clashed in the streets of Calais for several days in a row, injuring more than 50 - and one critically - until a 'peace meeting' was held in a camp and the violence ceased, migrants said.

"I have been here for 60 days, and I have tried to make the crossing on 40 days," said Adhanom Ghabrai, 28, an Eritrean migrant. "Every time I was stopped by police.

A 16-year-old Eritrean girl named Rita showed Reuters a fist-sized bruise on her upper arm where she said police had hit her with a baton, while others reported having been beaten.

"Sometimes we have to drive some of them (migrants) to the hospital because they have been beaten up by police," said Catherine Konforti, an aid worker the with Auberge des Migrants group, which provides supplies to migrants in makeshift camps.