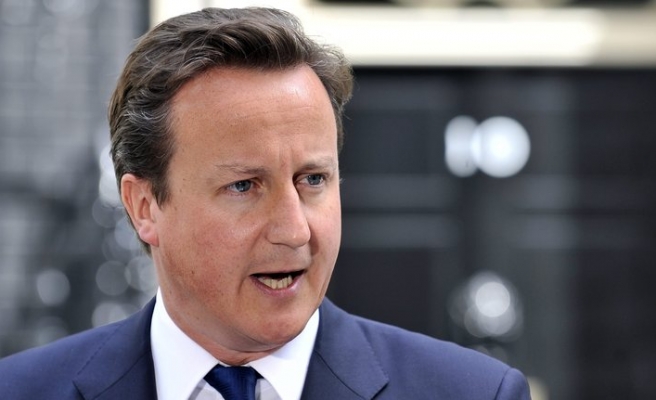 Prime Minister David Cameron said on Wednesday "a fight back is under way" to restore law and order to Britain's streets but rioting, looting and arson by gangs of youths spread from London to other cities overnight.

Youths fought running battles with police in the northern cities of Manchester and Liverpool as well as in the Midlands.

They smashed shop windows, carted off televisions and designer clothes, and torched buildings as police armed with shields and batons struggled to maintain control.

A boosted police presence meant London itself was relatively quiet after three days of violent unrest that shocked the nation and raised questions about the divided state of modern Britain.

About 16,000 police officers patrolled London's streets on Tuesday night but with shops, pubs and businesses in many areas closing early and boarding up windows, the city which hosts the Olympic games next summer, had the air of a town under siege.

"We needed a fight back and a fight back is under way," Cameron said after a meeting on Wednesday of the government's COBRA committee that deals with national security crises.

"Whatever resources police need they will get."

The prime minister branded the unrest, which erupted in poor, inner-city areas of London at the weekend, as nothing more than criminality and made no reference to social and economic conditions which community leaders say sparked the problems.

"There are pockets of our society that are not just broken but frankly sick," said Cameron, who made fixing "broken Britain" a cornerstone of his premiership.

But the spread of the unrest to other cities including Birmingham, Britain's second biggest, means the crisis is anything but over.

Gangs of youths in hooded tops battled police in Manchester, smashing windows and looting shops, and setting fire to a clothes shop.

Police said they had arrested 113 people in Manchester and Salford, and 50 in Liverpool.

Cars were burned and stores looted in West Bromwich and Wolverhampton in central England; and in Nottingham a gang of young men set fire to a police station. There were also disturbances in Birmingham and Leicester in central England, and Milton Keynes north of London.

The police -- already facing manpower losses due to public spending cuts -- are at full stretch. With thousands of reinforcements sent from regional forces to London, other cities might find their own police ranks depleted.

Police are likely to come under pressure over that incident after a watchdog said on Tuesday there was no evidence that a handgun retrieved by police at the scene had been fired.

Reports initially suggested Mark Duggan had shot at police before they shot and killed him.

In Birmingham, police launched a murder inquiry after three Muslim men died after being run over by a car in the mayhem there. A friend of the men told BBC radio they had been part of a group of British Asians protecting their area from looters after attending Ramadan prayers at a mosque.

"The car swerved towards them. It was cold-blooded murder," the friend said. The father of one of the men tried to save his dying son with CPR.

Shopkeepers and local residents in districts of London and other cities were reported to be organising vigilante groups to protect their property.

The violence has appalled many Britons who have watched television pictures of rioters attacking individuals and raiding family-owned stores as well as targeting big business.

But it has also prompted some soul-searching.

Community leaders said the violence in London, the worst for decades in the multi-ethnic capital of 7.8 million people, was rooted in growing disparities in wealth and opportunity.

"This disturbing phenomenon has to be understood as a conflagration of aggression from a socially and economically excluded underclass," the liberal Independent newspaper said.

"These youths live in the heart of British cities but they do not feel part of them. Far too little has been done by successive generations of politicians and public servants to integrate these individuals into normal society. The fuse for this explosion has been burning down for many years."

"The thugs must be taught to respect the law the hard way. These riots have shamed the nation and the government must be held to account."

"If Mr. Cameron gets it wrong and the rioting is still in full spate at the weekend, he may struggle to recover," it said.

Critics say government policies of chopping public spending and raising taxes to cut a huge budget deficit have aggravated the plight of urban youth as the economy struggles to grow and unemployment rises.

The awarding of huge bonuses to bankers has become emblematic of a culture of flashy consumption for the elite.

Corruption scandals within London's police force and a 2009 scandal over parliamentarians' expenses have also fuelled the notion that greed is a motivating factor across the spectrum of British society.

"Everyone's heard about the police taking bribes, the members of parliament stealing thousands with their expenses. They set the example. It's time to loot," a youth in the riot-torn London district of Hackney told Reuters.

Police said they had arrested a total of 770 people -- one as young as 11 -- in London since the unrest began on Saturday, and had charged 167 suspects, mainly with burglary and public order offences.

Officers would be out in force again on Wednesday night, said Stephen Kavanagh, deputy assistant commissioner of London's Metropolitan Police.

"Tonight we are going to plan for the worst again, that is what London deserves," he told BBC radio.