A group of 200 Scottish business leaders joined forces to support independence, one day after a rival group of 130 leaders had backed staying in the UK. 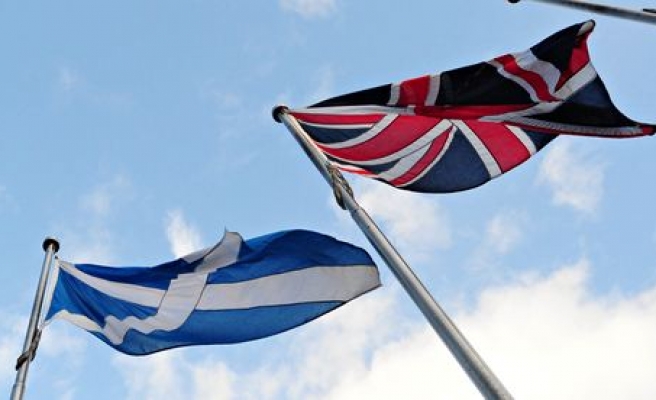 British Prime Minister David Cameron told Scots on Thursday that much of their industry and more than one million jobs could be put in jeopardy if they vote next month to leave the United Kingdom.

In a high-stakes gamble three weeks before a referendum, Cameron travelled to Glasgow to spell out the risks of secession, having previously remained largely on the sidelines of the debate due to both his and his Conservative party's limited appeal in Scotland.

Ignoring concerns that the campaign to keep the union together has been too negative, Cameron re-entered the fray to warn against the dangers of leaping "into the great unknown".

"This success doesn't happen by accident. It happens because of the skill of people in Scotland ... and the opportunities that come from being part of something bigger."

The economic impact of a vote to end the 307-year-old union with England has dominated the highly-charged debate, with business leaders finally coming off the fence in the final weeks to spell out their concerns ahead of the Sept. 18 ballot.

A group of 200 Scottish business leaders joined forces to support independence on Thursday, one day after a rival group of 130 leaders had backed staying in the UK.

Independence campaigners say successive London governments have failed to pay heed to the interests of Scotland's $250 billion economy, which accounts for about 10 percent of the total UK economy.

They argue that Scotland could flourish on its own, setting its own taxes, relaxing immigration rules and tapping the full benefits of North Sea oil.

However, Cameron said large parts of the Scottish economy were reliant on demand from customers in England, Wales and Northern Ireland, particularly in the financial services sector, where around 90 percent of its trade is with the rest of the United Kingdom.

As part of the United Kingdom, Cameron said, pensions were more secure, the currency guaranteed, borrowing cheaper and trade free from any restrictions on the flow of goods. The large network of UK embassies around the world also worked to promote Scottish business "to walk taller and shout louder".

On the issue of which currency an independent Scotland would use, he said: "Everyone knows that if you split up, you don't go on sharing a bank account or credit card.

"If we make foreigners of our neighbours, business becomes tougher, trade becomes more costly and complex and jobs become harder to find," he said.

Scottish nationalist leader Alex Salmond has said he wants an independent Scotland to keep the pound, something Cameron and many other London-based politicians say will not be possible.

Several recent opinion polls show support for independence growing, though it still lags behind the "No" campaign.

A "poll of polls" on Aug. 15, which was based on an average of the last six polls and excluded undecided respondents, found support for a breakaway stood at 43 percent against 57 percent for remaining within Britain.

Cameron had previously taken a low-profile role in the campaign, aware that his privileged English background plays badly in Scotland, where his Conservative party has only one of Scotland's 59 seats in the London parliament.

His return to Scotland was not all plain sailing. Mike Rake, head of the CBI business organisation which hosted Thursday's dinner, questioned Cameron's pledge to hold a referendum on Britain's European Union membership if he wins a 2015 election.

"We accept that calling a referendum on EU membership is a constitutional issue for government, but the ambiguity has already, and is increasingly, causing real concern for business regarding their future investment," Rake told the audience.

Cameron has promised an in/out EU membership referendum by the end of 2017 if he can renegotiate Britain's terms - a pledge seized on by pro-independence Scots as posing risks for firms in Scotland, which tends to be more pro-EU than England.