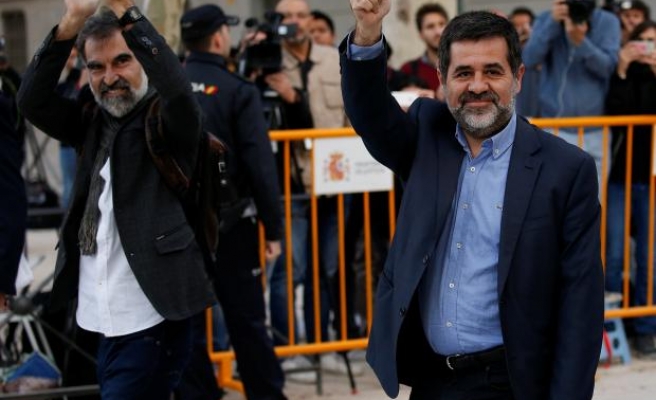 Two of the leaders of Catalonia’s most important pro-independence associations were sent to pre-trial prison Monday night without the possibility of bail.

The men - Jordi Sanchez Picanyol, activist and president of the Catalan National Assembly (ANC), and Jordi Cuixart Navarro, president of the Omnium Cultural organization - have been charged with sedition, or inciting people to rebel against the state, for their roles in anti-police protests last Sept. 20-21.

The protests were called by the two powerful separatist organizations in reaction to Spanish police raiding Catalan government offices and arresting a dozen officials in the Catalan government with the aim of blocking the independence referendum that was eventually held Oct. 1.

During the protests, three police cars were damaged and several police officers were temporarily trapped inside a building.

According to the judge’s ruling Monday, the protests “were not isolated, coincidental or called pacifically in disagreement with the police actions...they were part of a complex strategy…for the execution of the roadmap designed to obtain Catalonia’s independence”.

Yet the move to imprison the civil leaders of the Catalan independence movement has not gone over well with Barcelona’s pro-separatist government.

The ANC and Omnium - million-member strong separatist organizations which have been instrumental in drumming up support for secessionism through massive demonstrations - have called for protests Tuesday against the decision to jail the leaders, who face up to 15 years behind bars.