Over the past three years the independence movement in Catalonia has gained force, with roughly half of Catalans saying they want independence from Spain and a much bigger majority saying they should have the right to decide. 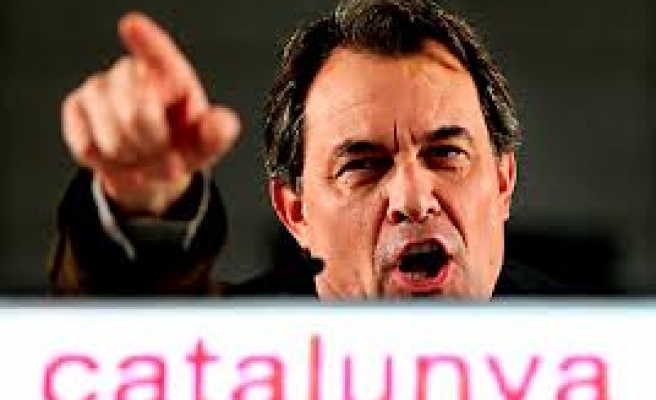 Spain cannot block a non-binding vote on Catalan independence that could become the basis for negotiations on Catalonia's future, the president of the northeastern region said in an interview published on Sunday.

"If I call a consultation, not to declare the independence of Catalonia nor to break with the Spanish state, but to know the opinion of the citizens of this country, a knee-jerk anti-democratic response from Spain would be pretty bad and disgraceful in the view of the entire world," Artur Mas told La Vanguardia, Catalonia's leading newspaper.

Prime Minister Mariano Rajoy has pledged to go to the Constitutional Tribunal to block any Catalan attempts to hold a referendum, arguing sovereignty is a matter for all of Spain to decide, but Mas said there was another possible approach.

"It is what I call the solution tolerated by the central government. They let us hold the consultation, they don't get involved, and afterwards we go to Madrid to negotiate," he said.

Over the past three years the independence movement in Catalonia has gained force, with roughly half of Catalans saying they want independence from Spain and a much bigger majority saying they should have the right to decide.

Catalonia, which has its own language, has significant self-governing powers. But economic doldrums, public spending cuts and perceptions of unfair taxes and the concentration of power in Madrid have fed breakaway fever.

The independence movement has become a major headache for Rajoy, who is struggling to pull Spain out of six years of economic stagnation and unemployment of 26 percent.

"The unity of all Spaniards is what makes us great, and what the great majority of Spaniards want," Rajoy said on Sunday. "Those who don't agree with that must respect that desire, and respect the law."

Mas, who only became a supporter of independence four years ago, set out a three-step process for Catalonia.

The first step of the process, taken in January, was to ask Spanish parliament to allow Catalonia to hold a referendum. Parliament, dominated by the ruling conservative People's Party, is expected to turn down that initiative.

The second step, Mas said, will be to hold a consultation without the express permission of the national parliament. He said the consultation would be legal under Catalonia's autonomy statute, which defines the region's powers.

The Catalan government has already set a date of Nov. 9 for a referendum - two months after an independence vote in Scotland - and has decided on a two-question formula: Do you want Catalonia to become a state? If your answer is yes, do you want this state to be independent?

If the central government blocked a non-binding consultation, Mas set out a third step, which he said was not ideal, which would be to use the next election in Catalonia, which must be held by 2016, as a proxy vote on independence.

Mas is not expected to rush to call early elections because his Convergence and Union political alliance, known as CiU, has lost ground in the polls, while a more radical pro-independence party, the Catalan Republican Left, or ERC, would probably win a large chunk of seats in the regional legislature.

The Catalan president told La Vanguardia that he and members of his government had been engaged in informal talks with Rajoy's government through December to try to find a way past the deadlock over the consultation, but that there were not any talks now.

Rajoy has resisted pressure to engage with Mas and seek a political solution to the crisis.

The European Union has said that Catalonia would have to re-apply to join the bloc if it broke away from Spain, a difficult road because Spain could thwart the necessary consensus to accept a new member.

But Mas said Europe would have to respect a peaceful, democratic independence drive by Catalonia.