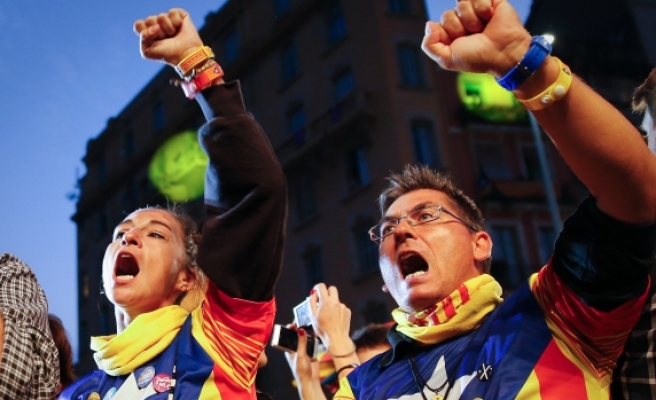 Despite winning 72 seats in the 165-seat regional assembly, the two separatist groups failed to get the 50 percent of the popular vote they were aiming for, meaning there is likely to be some debate between them before they press on with any independence agenda.

The vote, which saw a record-breaking 77 percent turnout, was promoted as a plebiscite on independence by Together for Yes, which won 62 seats, and the Popular Unity Candidacy (CUP), which won 10.

Together for Yes, led by regional President Artur Mas, has promised a declaration of independence within 18 months.

“We won,” he proclaimed to an ecstatic crowd in Barcelona. “Today was a double victory - the 'Yes' side won, as did democracy.”

The separatists’ failure to pass the 50 percent vote mark - they fell 2 percent short - raises questions about how they will proceed. The CUP, which has a more radical leftist platform than Mas’s alliance, had said they would not push for unilateral independence unless the two separatist groups achieved a majority.

The second-placed party, the centrist Ciutadans, secured 25 places, up from nine in the 2012 election. “With these results Mas should resign and go home,” Ines Arrimadas, leader of the party in Catalonia, said. “The majority of Catalans have turned their back to Mas.” She will now lead the opposition in the Barcelona parliament and immediately called for a fresh election to focus on issues other than independence.

The Popular Party, which currently rules Spain, and anti-austerity Podemos both saw disappointing results, winning only 11 seats each.

The Catalan and Spanish media was largely divided over their interpretation of the result.

“Absolute Majority” screamed the front page of Ara, the most read Catalan newspaper. El Mundo, a leading Spanish daily, was headlined: “The majority of Catalans say no to independence”.

Spanish Prime Minister Mariano Rajoy has vowed to stop any move towards independence although he has not clearly outlined how he will do this. A general election is due in December and how to deal with Catalonia’s desire for independence will be a burning issue.

Elsa Bernat, a teacher and lifelong separatist, voted for the CUP. “I'm not scared at all,” she told Anadolu Agency. “Only that we could go back from this, I would be extremely upset if the independence didn't go through but I hope it will. I've never felt Spanish and I think big states don't work.”

Catalonia, one of Spain’s richest and most industrialized regions, has a population of around 7.5 million people.

It has been part of Spain for more than 500 years but due to a distinct culture and language, combined with complaints that Madrid treats the region unfairly, the independence movement has grown over the last decade.

Nicolas Sartorius, executive vice president of think-tank Fundacion Alternativas, told Anadolu Agency that even if Catalonia declared independence it would not go ahead because it would be illegal.

“Said declaration of independence wouldn't have any effect, not internally, not externally, because it wouldn't be recognized by any state,” he said.

Paula Rodriguez, who is from Madrid but lives in Barcelona, said she was not worried by the result. “I respect their decision if they don't want to be in Spain but I believe a referendum could be a better way to really know the choice of the people,” she said.

“But with not arriving at 50 per cent of votes, I think everything will stay the same.”

A number of blocks remain in the way of a potential independence declaration, namely the talks between Together for Yes and the CUP and the central government vehement opposition to separatism and its insistence that independence would be unconstitutional.

However, Mas and the separatists remain determined.

“We have an enormous force and legitimacy to push this project ahead. We will do it,” said Mas in his victory speech. “We ask the world to recognize the victory of Catalonia and the victory of ‘Yes’.”