Next week's referendum in Scotland on whether it should split from the United Kingdom has added fervour to the independence campaign in Catalonia. 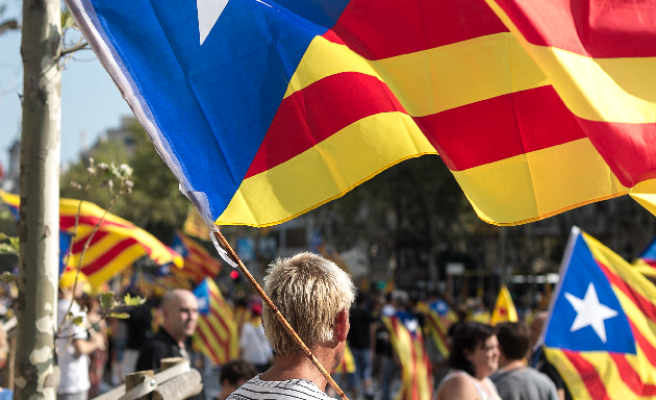 Hundreds of thousands of Catalans packed the streets of Barcelona on Thursday to demand the right to vote on a potential split from Spain, their ambitions boosted by an independence referendum scheduled for next week in Scotland.

More than half a million Catalans signed up to take part, organizers said. They dressed in red and yellow, the colours of the Catalan flag, forming a "V" for "vote" in a show of support for holding a referendum.

In a festive atmosphere on Catalonia's national day, La Diada, people stood side by side along two of Barcelona's main arteries to form a huge "V", with the red-and-yellow stripes of the Catalan regional flag, La Senyera, clearly visible from aerial footage.

Many wore T-shirts saying "Ara es l'hora" ("Now is the time") in the Catalan language. Barcelona police estimated that as many as 1.8 million took part.

"We want a say in politics and our future. We've won back our sovereignty (by getting independence on the political agenda) and realised the strength we have, if we mobilise, to change things," said Carme Forcadell, head of the National Catalan Assembly (ANC), one of the organisers of the event.

Catalonia is a wealthy region in Spain's northeast with its own language and culture. Its long-standing independence movement has grown significantly over the last decade, exacerbated by Spain's economic crisis and what many see as a deaf-ears tactic by the Spanish government in Madrid.

The Catalan regional government, which like other Spanish regions has a large degree of autonomy, has called a non-binding referendum on Nov. 9 over whether Catalonia should become a separate state.

The Madrid government says the vote is illegal and cannot go ahead and the issue is deeply entrenched, pitting Catalonia against the rest of Spain.

"We don't expect anything good from the Spanish government. All we get is misunderstanding, intolerance, threats and totally anti-democratic attitudes. They've always been like that," said Oscar Sanchez, who is jobless.

"We just want to be treated equally, with respect. Nothing more. We are Catalans, not Spaniards."

Polls show that 80 percent of Catalans want to vote on the issue.

Catalonia's campaign has drawn momentum from the upcoming referendum on whether Scotland should split from the United Kingdom, support for which has gained ground recently to make it a close call.

The government in London opposes Scottish independence, but says it will abide by whatever the voters decide.

The price of Spanish government bonds has been falling as edgy investors trim their holdings before Scotland's vote, where a victory for the nationalists would no doubt fuel Catalonia's demands.

The fact that Scots have been allowed to vote at all was singled out as the main motivation for taking part in Thursday's event, organisers and participants said.

"We don't understand why that is constantly denied. We look up to Scotland," said Victor Panyella, a 50-year-old professor who was wearing a yellow T-shirt with a red "V" on it.

"They are so lucky to belong to a country that allows that kind of vote."

"I ask Spain's institutions and especially its government to take good note of the mood on Catalonia's streets," he said.

"What is going on today is not a challenge to the state, it is the clamour of a large part of Catalan society."

An official Catalan opinion poll shows support for an independent state has tripled to 45.2 percent in March 2014 from 13.9 percent in March 2006. Many commentators in Madrid, where there is fierce opposition to Catalan nationalism, question the way such polls are carried out, however.

Spain's state pollster CIS found this year that around 45 percent of Catalans support full independence, 20 percent would support a federal state and 23 percent back an autonomous region.