Catalonia pushes ahead with independence plan 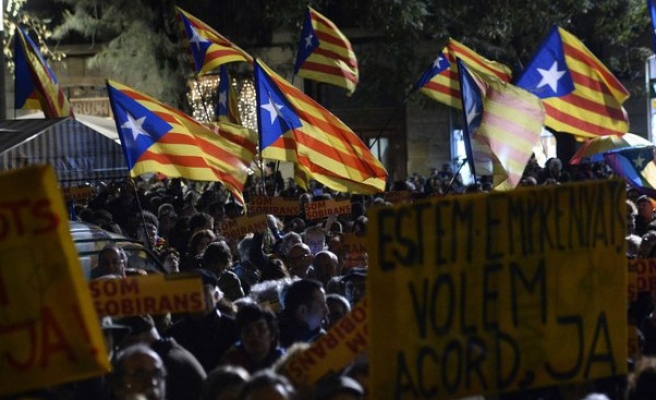 Catalonia is pushing ahead more slowly than expected with its independence plan as separatist leaders change tactics and avoid direct confrontation with Madrid in their bid to break away from Spain.

After winning a parliamentary majority in a regional election in Catalonia in September, the pro-independence parties vowed to implement an 18-month roadmap for independence from Spain by 2017.

The plan calls for the regional government to create basic laws, a tax system and state structure for the wealthy, industrialised northeastern region whose capital Barcelona is a major tourist draw.

But Catalonia has so far done little to implement the plan, to the relief of national political parties and the central government in Madrid which are gearing up for a repeat general election on June 26.

The polls -- the second in just six months -- come after bickering parties failed to reach an agreement on a coalition government following inconclusive élections in December that left Spain in political limbo with a caretaker government with limited powers.

"The separatists who thought a quick and unilateral solution was possible are realising that this is not the case. This is why they are looking for an interlocutor to talk to," said Miquel Iceta, head of the Socialists' Catalan faction which opposes independence.

Catalan separatists have restarted their talks with acting Prime Minister Mariano Rajoy's conservative government, which had been practically non-existent.

After their talks Puigdemont said "profound differences" remained regarding his region's demand for a referendum on independence which is opposed by virtually all Spanish political parties.

"Everything is slower and more complicated than what was announced and if they remained on the path of confrontation, it would only generate frustration," said political analyst Josep Ramoneda.

While support for independence has soared in recent years in Catalonia -- a region of 7.5 million people with its own language -- it does not have the backing of a strong majority.

Pro-independence parties won a majority in the 135-seat regional Catalan parliament in September but their share of the vote was 48 percent, giving their opponents a powerful argument against secession.

The pro-independence bloc is also weakened by divisions within its ranks over strategy and the poor state of Catalonia's public finances.

While the region accounts for about one-fifth of Spain's economic output, it is heavily in debt and not able to finance itself abroad.

It depends on loans from the central government of its liquidity and Madrid could turn off the tap if Catalonia takes significant steps towards implementing its roadmap for independence.

Spanish courts also monitor closely any moves by the Catalan government and are quick to intervene.

Spain's Constitutional Court suspended an independence referendum called by the Catalan government in 2014 as well as a resolution passed by Catalonia's parliament declaring the start of a secession process.

Work behind the scenes

Catalan officials say they are working quietly behind the scenes to advance the separatist roadmap.

"Work is being carried out away from the limelight, not even a comma has been changed from the plan," said a senior Catalan official who spoke on the condition of anonymity.

Pro-independence parties in November passed a motion in the Catalan parliament reaffirming their intention to split from Spain to form their own country.

"We have a state that does not let us do anything and at the drop of a hat turns to the courts. This is why we must be shrewd and rigorous," said Jordi Turull, the leader in parliament of Catalonia's ruling pro-separatist coalition.

This angers hardline separatists like the Catalan government's coalition partner, the tiny, anti-capitalist CUP party, which calls for regional institutions, including local police, to disobey the law.

"If we increase political confrontation, Catalonia would cease to be an internal issue and would be on the international agenda."

When everything is ready by the start of 2017, he could approve the necessary laws and create independent state structures, launching a head on challenge to Madrid.