Clashes as Ukraine MPs back more autonomy to rebels 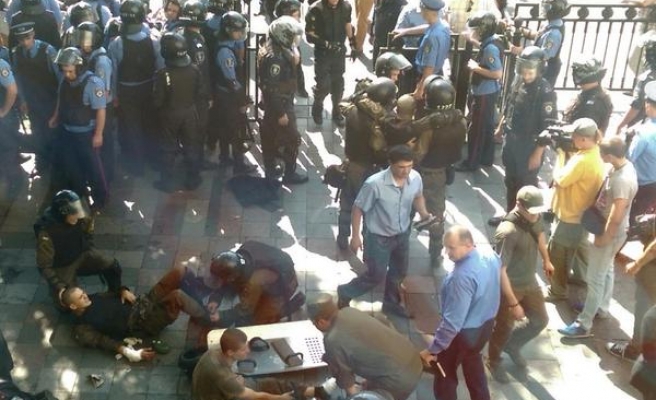 A blast was also heard outside parliament, eyewitness said, although the cause was not immediately known.

About a dozen people were reportedly injured, witness said.

Several people were seen bleeding, including police officers and apparently journalists, and lying on the ground in front of the parliament, the journalist said.

The Western-backed constitutional reforms are required under the terms of a Western-backed peace deal signed in February, which called for Kiev to implement "decentralisation" by the end of this year.

But critics have branded the reforms "un-Ukrainian".

A total of 265 lawmakers voted in favour of the reforms at a stormy session of parliament in Kiev, with protests both inside and outside the buidling.

Dozens of demonstrators scuffled with police, eyewitness saw. Protesters fired at least one smoke grenade that sent up a cloud of black smoke outside the building.

Tear gas was used by both sides, an AFP correspondent said.

The controversial reforms have been sought by Kiev's Western allies, who see them as a way of trying to end armed conflict in the east that has claimed more than 6,800 lives over the past 16 months.

The bill has sparked heated debate in Ukraine where opponents see it as an attempt to legalise the de facto rebel control of part of the ex-Soviet country's territory.

The reform bill grants more powers to regional and local lawmakers including in the eastern areas currently under rebel control.

But contrary to the expectations of separatists, it does not definitively hand the largely industrial eastern region the semi-autonomous status that the insurgents are seeking.

According to the text of the draft legislation, the region's status needs to be defined by a separate law.

Kiev and the West accuse Russia of backing the rebels militarily and in particular deploying its troops to the conflict zone, claimes that President Vladimir Putin and the Kremlin have repeatedly denied.

A group of Ukrainian lawmakers had earlier Monday had disrupted the parliament to block the vote on the constitutional reforms, which they condemned as "anti-Ukrainian" and "pro-Vladimir Putin."

Lawmakers from the Radical Party -- part of the pro-Western coalition behind President Petro Poroshenko -- had also blockaded the speaker's rostrum in an attempt to halt the crucial session.

Members of the extreme-right Pravy Sektor group blocked traffic outside the parliament, while several hundred activists from the nationalist party Svoboda rallied outside the building against the Western-backed reform.

Poroshenko met at the weekend with lawmakers from the pro-presidential coalition who oppose the reform in an attempt to persuade them to change their minds.