Clashes erupt in Athens after protest to mark 2008 police killing

Thousands had marched for the second time that day to commemorate the police shooting of 15-year-old Alexis Grigoropoulos, and in support of jailed anarchist Nikos Romanos. 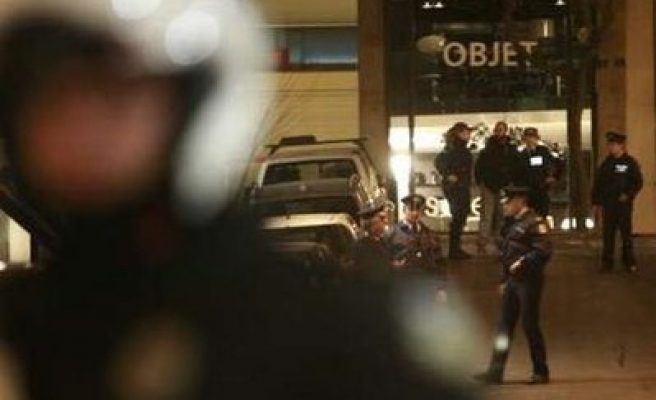 Rampaging protesters threw petrol bombs at police and set bank ATMs, cars and shops on fire in central Athens on Saturday, the anniversary of the police killing of a teenager six years ago.

Riot police used teargas and water cannon to beat back protesters in the bohemian Exarchia neighborhood, where about 200 black-clad youths hurled stones and Molotov cocktails at them. A cloud of smoke billowed into the sky from the clashes.

At least two shops were set on fire, and dozens of others damaged. Police said they detained nearly 100 demonstrators.

The clashes erupted after about 6,000 protesters marched to commemorate the 2008 police shooting of Alexandros Grigoropoulos, an anniversary that normally draws thousands of anti-establishment protesters.

This year's protest was in solidarity with a jailed self-proclaimed anarchist who witnessed the death of Grigoropoulos and who is now on hunger strike demanding he be allowed to attend university classes.

Nikos Romanos, 21, was sentenced to prison for robbery in October and began his hunger strike on Nov. 10. He is in critical condition in hospital.

The protests come at a sensitive time for the government, which is negotiating to make an early exit from an unpopular European Union and International Monetary Fund bailout programme that has meant years of austerity for Greeks.

At a shrine at the spot where Grigoropoulos was shot dead, mourners left roses and notes.

"I'm leaving this red flower, red like your blood spilled on the pavement," read one note. A banner was unfurled reading "When the state murders, resistance is demanded."

The government had appealed for calm in the days leading up to the protest and submitted an amendment to parliament allowing prisoners to follow university courses via distance learning. But Romanos has insisted on attending classes in person.