President of Colombia to begin Colombia's first ever state visit to the UK. 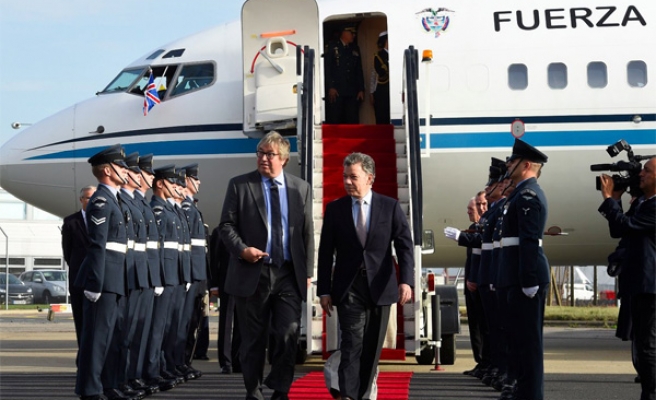 Colombian President Juan Manuel Santos, who won this year's Nobel Peace Prize for his efforts to implement a peace deal with FARC rebels, begins a state visit to Britain on Tuesday that includes a trip to once conflict-ridden Northern Ireland.

Santos will be greeted by Queen Elizabeth II and Prime Minister Theresa May, before attending a banquet at Buckingham Palace.

It is the first such visit by a Colombian president and Santos will be treated to the best of British pomp and ceremony, including a state carriage procession along the Mall in London.

But it comes at a difficult time for the 65-year-old after voters rejected his hard-fought peace deal with the Revolutionary Armed Forces of Colombia (FARC) in a referendum on October 2.

Santos has since been in talks with the Marxist rebels and those who opposed the deal, notably former president Alvaro Uribe, and said he wants a new agreement to be secured by Christmas.

But Angelika Rettberg, expert in peace processes at the Colombian university of Los Andes, warned that while his trip to Britain may boost his international profile, it "doesn't help him fix the crisis at home".

If anything, it "aggravates the perception that he's interested in make a good impression abroad" while he should be working on the peace process, she told AFP.

The first day of the visit will be dominated by ceremonial events, including tea with heir-to-the-throne Prince Charles and a meeting with members of parliament.

On Wednesday Santos will hold talks with May at Downing Street, before heading to Belfast on Thursday to meet key figures from the Northern Ireland peace process.

"Its success is a constant reminder of what is possible," Santos wrote in The Times on Monday.

Santos was briefly caught up in the Irish conflict when, as a young man working in London, he was thrown to the ground by a bomb left in a bin by the IRA paramilitary group.

"The experiences of Northern Ireland continue to inspire my vision of Colombia as a country at peace with itself," Santos wrote.

"I know that differences and grievances persist in Northern Ireland but its people have learnt to express them through democratic means."

Northern Ireland was plagued by three decades of violence over British control of the province, in which 3,500 people died, until the 1998 Good Friday accords largely brought an end to the fighting.

The Colombian government's 52-year-long war is of a different magnitude, however. Some 260,000 people have died, and 6.9 million have been forced to flee their homes.

Although a ceasefire with FARC has been extended until December 31, Santos warned in the Times that "time has become the biggest threat" to peace.

"This is an unstable environment and needs only a spark to start a fire," he wrote.