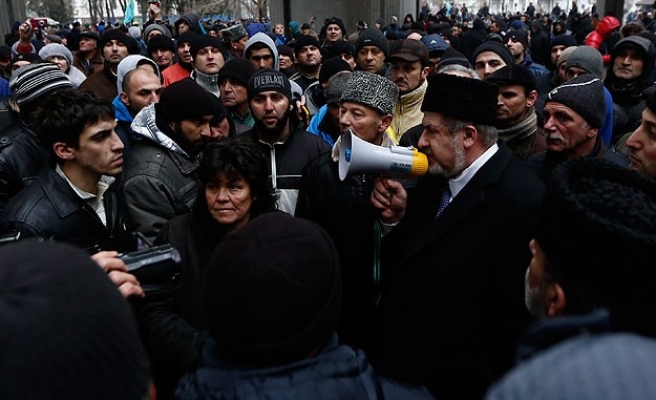 Reports from Crimea suggest that a group of Russian-speaking men have been drawing up lists with the names and addresses of Crimean Tatars and marking their homes with an X.

Radio Free Europe Radio Liberty (RFERL) interviewed Nurie, a 48-year-old Crimean Tatar woman in the central Crimean town of Bakhchysaray, who said she saw a gang marking houses, including her own, with chalk in the predominently Tatar neighborhood of Aqchuqraq.

"My neighbor who saw them was so scared and tried to hide in her house immediately. She called me. We went outside and saw the mark on our doors also," she said.

"The door is scratched by a screwdriver. There also were marks made by chalk but we've washed them off. The scratches still remain."

Her neighbor, who had also had her house marked, called the local police to report the incident, but they were told that there was nothing the authorities could do to stop the gang.

According to the Kavkaz Center, Ukraine's Right Sector leader Dmitry Yarosh, who played a key role in the protests which led to the ousting of former pro-Russian president Viktor Yanukovich, warned that the Russians were preparing to massacre the Crimean Tatars.

Saying that he has instructed hospitals in Crimea to prepare to take on high numbers of casualties, Yarosh claimed that Russia has established teams to carry out murders of Crimean Tatars in order to provoke a bloody war.

Crimean Tatars are the native Turkic-speaking Muslim population of the Crimean peninsula, comprising of around 13% of its population, which is predominently Russian, after Soviet dictator Josef Stalin exiled them from their homeland in 1944.

How can the world sit back and just allow Russia todo as they please? The US and Britian promised thiswould never happen!!!Does the world have amnesia?The first thing the Nazis did was mark the Jews...then came 8 million murders.The first thing USSR did in 1944 was mark "x" on the Tatars home...then came 120,000 muders. Now the Russians mark the Tatars with "x" again...are we waiting for the murders???Gos help us all.