Crimean Tatars, despite being natives of Crimea, have become a minority in their homeland after they were forced out by Soviet dictator Josef Stalin in 1944. 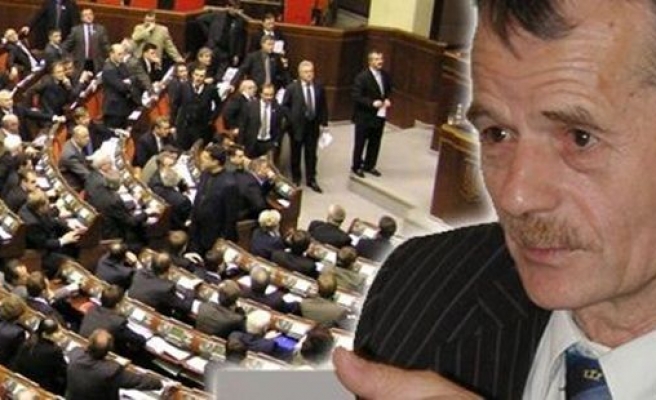 Ukrainian parliament deputy and former Crimean Tatar Mejlis (parliament) leader Mustafa Jemilev has urged the Ukrainian government to impose the state of emergency in Crimea after armed men took control of two airports in the autonomous peninsula on Friday.

Speaking on the events, which Ukraine's government has described as an invasion and occupation by Russian forces, Jemilev said “In the view of recent events and the situation in Crimea it is necessary to impose state of emergency in Crimea, all the armed forces should be put on alarm.”

Jemilev revealed that he had invited Turkey's foreign minister Ahmet Davutoglu to Ukraine to discuss the crisis, and that Davutoglu would be visiting the country tomorrow. Davutoglu also confirmed that he was leaving for Kiev this evening on his Twitter page.

Crimean Tartars, who make up 13 percent of the Crimea population, are also against a decision voted on by the Parliament on Thursday, to hold a referendum on May 25 to decide the future of Crimea's status.

They argue that the decision was made under duress, when the armed and masked men surrounded the parliament and forced the decision, which will benefit the Russian majority.

A Crimean Tatar who lives in Turkey and is president of a foundation representing Tartars in Turkey, Zafer Karatay, says that the proposed constitution violates the rights of Tartars, is against international law and the Ukraine constitution.

"Everyone kept away from the parliament building, and Konstantinov forced MPs to vote for the favor of referendum." Karatay said.

Karatay also added that on Friday Crimean Tatars across the Crimea will meet in their mosques after Friday prayers to discuss what can be done to "protect our people’s rights”.

Crimean citizens will be asked to decide on May 25th whether to be part of a Ukraine or not, after the vote was supported by 61 out of 64 MPs in the parliament.

The Crimea Association, based in Turkey's north-western city of Bursa, supported Jemilev's call for a state of emergency to be issued in the peninsula.

The group said they will be protesting in Bursa tomorrow to highlight the sufferings of the Turkish-speaking Muslim Tatars in Crimea, who fear for their safety should the peninsula be ceded to Russia.

Another Tatar cultrual organisation based in Ankara, the Crimea Foundation, issued a press release condemning the forcible entering of parliament, calling it a "terrorist act".

Up to twenty Turkish and Crimean Tatar organizations also published a joint statement on Friday expressing support for the Crimean Tatars.

280,000 Crimean Tatars, despite being natives of Crimea, have become a minority in their homeland after they were forced out by Soviet dictator Josef Stalin in 1944.

Approximately half of them died from hunger and disease in the early years of the deportation.

After the fall of the Soviet Union, many Crimean Tatars returned home, but most remain as a diaspora spread across a number of countries, with most of their descendents now living in Turkey.

Crimea was once a part of the Ottoman Empire until the Russian-Ottoman wars resulted in the peninsula becoming independent under the Kucuk Kayncarca agreement of 1774.

It became part of the Soviet Union in 1921, having experienced the brunt of many traumas in the ongoing Russian-Ottoman wars of the 19th century.