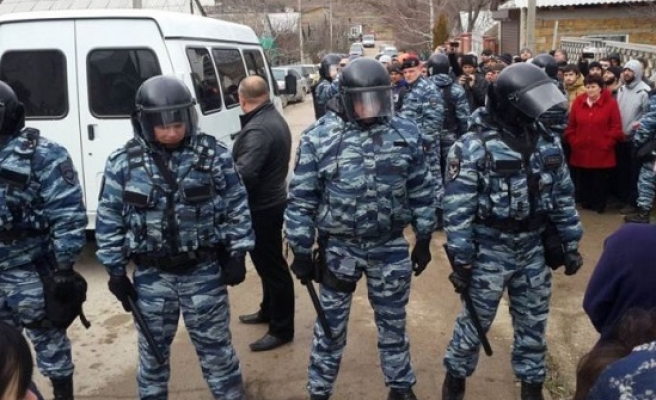 "A new wave of repressions has started in Crimea against Crimean Tatars," the community's governing body, the Mejlis, said in a statement.

The lawyer representing the detained men, Emil Kurtbedinov, said on Friday that all four men had already been charged with organising or joining a terrorist group, for which they could face up to 20 years in jail.

Hizb ut-Tahrir (Party of Liberation) seeks has been banned in Russia since 2003.

Since annexing Crimea in March 2014, Russia has cracked down on the Crimean Tatars, an indigenous ethnic group that makes up about 15 percent of its population, many of whom oppose Moscow's rule of the peninsula.

The sweep took place across the peninsula including around the Black Sea resort towns of Yalta and Alushta.

The search saw security forces break the windows of one house with sleeping children inside, the Mejlis said.

The Ukrainian foreign ministry on Friday condemned "political repression" against the Crimean Tatars, whom it referred to as Ukrainian citizens, and demanded their immediate release.

Crimea's chief prosecutor Natalya Poklonskaya told pro-Kremlin Kryminform news agency that those detained "are not Crimean Tatars, they are a terrorist organisation. We do not divide up people on the basis of their ethnic group."

Those detained included Emir-Usein Kuku, a member of a rights group that searches for Crimean Tatars who have gone missing on the peninsula since its annexation, Smedlya said.

Also detained was an ethnic Russian who converted to Islam.