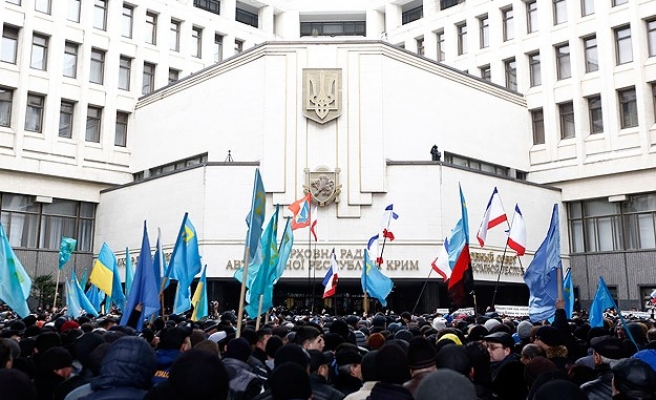 Muslim minority Tatars living in the Crimea are manning the streets and mosques as they fear a repeat of the exile they faced in 1944 under Stalin, which saw them scattered in labor camps across the barren steppes of Central Asia.

Thought to number approximately 200,000 at the time, almost half the population would die from hunger, thirst and disease in their first year of exile.

This was Soviet dictator Joseph Stalin’s punishment for the Tatars, whom he accused of collaborating with the Nazi regime, despite the fact that many Tatar men had served in the Soviet army. The exiled Tartars only returned to the region in the 1980s.

The 280,000 Crimean Tatars living in the Autonomous Republic of Crimea constitute close to 13 percent of the total population, according to Turkey’s Foreign Ministry,

Idil Izmirli, an expert on Islamic identities in Crimea from George Mason University, said that the recent developments in the Crimea reminded her of the buildup to the exile of her community seventy years ago.

"After their invasion of Crimea on 18 May 1944, the Russians expelled the Crimean Tatars from the region. They raided the parliament and the council of ministers, and then raised a Russian flag."

Izmirli said her relatives in the Crimea don’t feel safe and that although "western sources report that there are 6,000 troops in Crimea, my relatives say that 15,000 soldiers are located in there. Soldiers are everywhere and airports are closed.”

She added that "we want Turkey to close the straits and not to let the Russians pass' and demanded U.S. President Barack Obama put more pressure on Russia."