Turkish Cypriot President Dervis Eroglu said experts from both sides were set to gather to discuss further issues in economy. 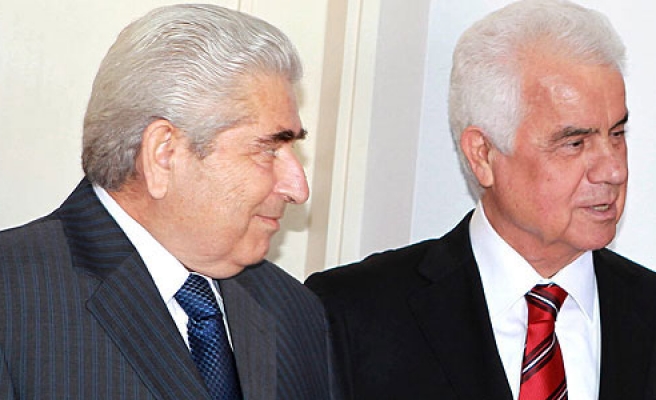 Turkish and Greek Cypriot leaders met at the buffer zone in Lefkosa on Friday in their Cyprus reunification talks and discussed economy.

Speaking to reporters, Turkish Cypriot President Dervis Eroglu said today's meeting proved successful in moving the two sides closer on certain aspects of the chapter on economy, however, added that there was still more work to do.

Eroglu said experts from both sides were set to gather to discuss further issues in economy.

The two Cypriot leaders will meet 19 times till October 21.

Also speaking to reporters after the meeting, UN Secretary General's Special Envoy for Cyprus Lisa Buttenheim commented on Greek Cypriot plans to launch oil and natural gas exploration on the seabed to the southeast of the island, saying natural resources around the island should be used for the good of both the Turkish and Greek Cypriot communities.

"If found, natural resources around the island should be deployed for the good of all Cypriots under a unified federal Cyprus," Buttenheim said.

The Greek Cypriot administration has recently said it would begin oil and natural gas exploration and drilling was to start soon.

The move has drawn fierce criticism from Turkey which said it would make a continental shelf delimitation agreement with the TRNC in case Greek Cypriot administration launched drilling before a settlement was reached to end the 37-year old division of the island.

The Greek Cypriot side had signed a deal with a U.S.-based energy company to start drilling in an 324,000-hectare economic zone adjacent to the Israeli waters.