Eroglu said he was scheduled to meet Christofias again on Friday to take up the issue of police force in a united Cyprus state. 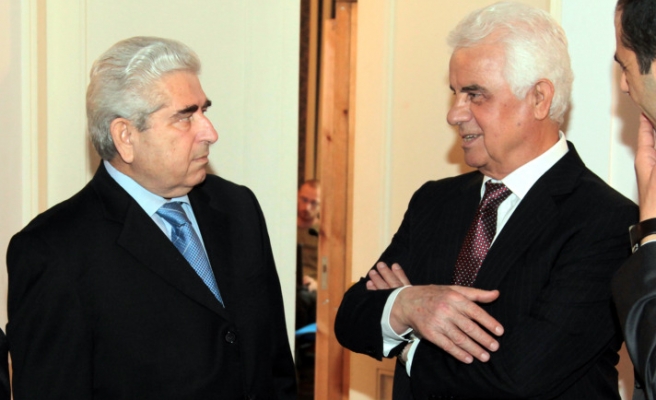 Turkish Cypriot President Dervis Eroglu and Greek Cypriot leader Demetris Christofias met again on Tuesday in their talks to find a settlement to the division Cyprus amid a dispute erupted after the Greek Cypriot side moved to start offshore drilling for hydrocarbon reserves southeast of the Eastern Mediterranean island.

Speaking to reporters after the meeting, Eroglu said today's talks had focused on issues related to the European Union, adding the Greek Cypriot natural gas drilling did not come during the meeting.

"The Greek Cypriot side didn't raise the issue, so neither did we," Eroglu told reporters.

Eroglu said an agreement he and Turkish Prime Minister Recep Tayyip Erdogan had signed in New York had made a remarkable impact, adding, "the agreement is very important in the sense that it demonstrated both our resolve and Turkey's determination on this particular issue."

Eroglu said he was scheduled to meet Christofias again on Friday to take up the issue of police force in a united Cyprus state.

Also speaking to reporters after the meeting of the Cypriot leaders, Alexander Downer, UN secretary general's special advisor on Cyprus, said Eroglu and Christofias would discuss the chapter on security in their next meeting on Friday, which he said was the last chapter in the two leaders' talks.

"The next week will open a whole new stage which will see necessary preparations for the leaders' meeting with UN secretary general in October," Downer said.

Downer said Eroglu and Christofias did not discuss hydrocarbon exploration in Tuesday's meeting, adding that the leaders knew that the issue would risk derailing the entire negotiations process.

"We don't want talks to collapse. A united federal Cypriot government at the end of the settlement talks would be the sole authority on the island's natural resources and
water. This is something that the two leaders had agreed upon," Downer said.

Downer said neither the Turkish Cypriot side nor the Greek Cypriot side had appealed to the UN secretary general for mediation on the issue of offshore drilling.

After that, Turkey and the Turkish Cypriot government signed their own continental shelf agreement on Wednesday, permitting state-run Turkish Petroleum Corporation (TPAO) to start exploration north of the island.