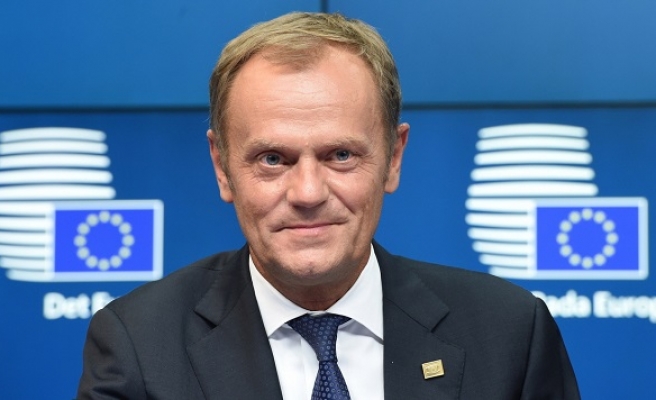 Tusk will chair an EU summit Thursday and Friday in a bid to finalize a plan outlined last week to halt the flow of refugees to Europe. Turkey is central to the proposal, which hinges on it readmitting migrants in exchange for concessions including progress on its EU membership bid.

The summit “goes far beyond migration, so that this process also becomes an opportunity (for Turkey) to support the settlement talks in Cyprus,” Tusk said. “Only if this is possible, can we move forward here.”

Over the past year, hundreds of thousands of refugees have crossed the Aegean Sea to reach Greece. This has placed a huge strain on the austerity-hit EU member and threatened the EU’s internal open border system as countries to the north of Greece impose frontier restrictions.

Ankara has agreed to take back refugees from Greece in return for a 6 billion euro ($6.7 billion) refugee aid package, visa-free travel in the EU for Turkish nationals and fast-tracked EU accession.

Following a meeting with Tusk on Tuesday, Greek Cypriot administration leader Nicos Anastasiades threatened to block any attempt to open new policy areas, or "chapters", on Turkey’s EU bid unless it follows the terms of a 2005 protocol that would see Ankara recognize Cyprus’s Greek administration and open Turkish ports and airports to Greek Cypriot cargo and passengers.

Cyprus was divided in 1974 when the threat of a Greek coup led to Turkey’s military intervention.

Negotiations, spurred by the election of Turkish Cypriot President Mustafa Akinci in April, are seeking to reunify the island under a federal system and the participants have spoken of their hopes of achieving agreement by the end of the year.

However, Southern Cyprus is still blocking chapters of law that need to be opened to allow Turkey to join the EU.