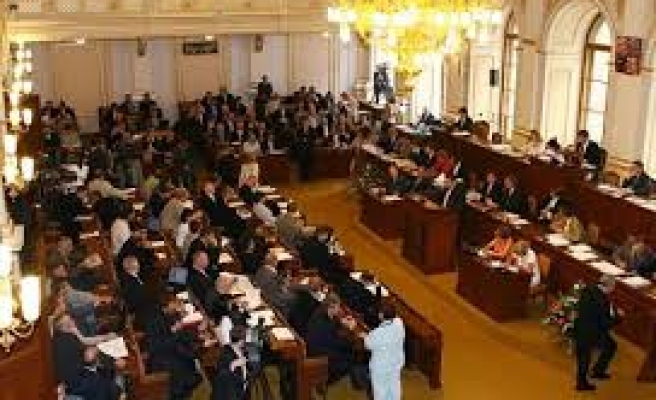 Czech political parties neared agreement on Thursday on holding an early election to end a stand-off with the president that has crippled policymaking for nearly two months with the economy struggling to recover from recession.

Opinion polls show the centre-left opposition Social Democrats are likely to win an early vote by a double-digit margin.

Propelled by both conservative and left-wing sentiment in favour of an early election, the lower house is expected to vote next week to dissolve itself, enabling a vote as soon as October. The next regular election would be in May next year.

Markets have been largely undisturbed by the deadlock because Prague boasts the lowest borrowing costs among central European neighbours thanks to its fiscal rigour and low debt load - half the European Union average.

But Czechs want a viable government in place to tackle priorities such as growth after nearly two years of recession.

The main parliamentary parties have been locked in battle with President Milos Zeman since June, when he named his long-time ally, economist Jiri Rusnok, against their wishes to head a new cabinet after the previous centre-right government collapsed under the weight of a spying and bribery scandal.

Parties accuse the leftist president, who won the EU member's first direct presidential election in January, of flouting constitutional conventions and making a power grab by appointing his ally.

Rusnok lost a vote of confidence on Wednesday. But the vote revealed cracks in the centre-right coalition with its failure to muster a majority that would give it legitimacy to pressure Zeman to appoint its own candidate as prime minister.

The break prompted the conservative TOP09 party, part of the former ruling coalition, to join the main leftist parties - the Social Democrats and Communists - in support of a new election. TOP09's vote will give a motion to dissolve parliament the needed constitutional majority to pass.

"We have these new votes guaranteed by TOP09," said Social Democrat leader Bohuslav Sobotka. "I really hope that...(besides the three factions), other parties also join us. I think it would be a great signal for citizens... We will act so that the Czech Republic remains a parliamentary democracy."

Rusnok's government, in office for a month and including allies of Zeman, has angered various parties by dismissing senior ministry officials and the heads of the state railways.

Under the constitution, a parliamentary resolution on its own dissolution will go to the president. He then has to dissolve the house. Zeman has no specific time limit to make the decision but he has spoken in support of an early election.