Many Czechs were upset he used crude language to make his point, but also because they felt that, by drawing closer to Moscow, he was betraying the legacy of the revolution. 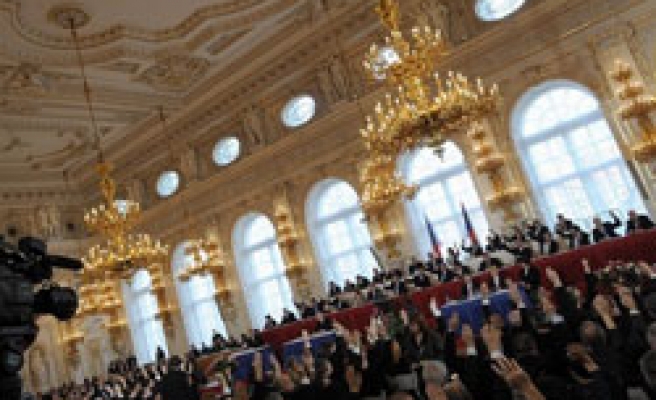 Czechs who helped bring about the "Velvet Revolution" that overthrew Kremlin-backed Communist rule are marking the 25th anniversary this week by accusing the country's present-day leaders of once again cosying up to Russia.

The focus of their anger is President Milos Zeman, who has taken a pro-Russian line on economic sanctions and described Pussy Riot, the punk group jailed for blasting out a song denouncing President Vladimir Putin in a Moscow cathedral, as hooligans who should not have been treated as political prisoners.

Many Czechs were upset he used crude language to make his point, but also because they felt that, by drawing closer to Moscow, he was betraying the legacy of the revolution.

"We are risking our name, our achievements, and our secure future," said an open letter signed by founders of Civic Forum, a body once led by dissident Vaclav Havel that helped organise the protests against Communist rule.

The Ukraine crisis has put many ex-Communist states in eastern Europe in an awkward position: they feel pressure to join their European Union allies in condemning Moscow for annexing Crimea and backing pro-Russian separatists, but they don't want to ruin important commercial relations with Russia.

That has led to charges against some governments -- especially in Hungary and Serbia -- of back-sliding into the Kremlin's orbit.

Czech Prime Minister Bohuslav Sobotka, a moderate centre-left politician who holds most executive power under the Czech constitution, has stuck closely to the EU line over Russia although he negotiated within the bloc for a lighter version of sanctions.

Some Czechs are sensitive to any signs of softening towards Russia, seeing it as a betrayal of the Velvet Revolution and of dissidents like Havel, who later became Czech president.

"We cannot be reliable ... members of the Western community and at the same time legitimise or even lend international support to the Kremlin's aggressive and illegal policies," said the founders of Civic Forum in their letter.

Monday is the anniversary of a student protest march in 1989 that was violently dispersed by police, triggering the peaceful overthrow of Communism. As part of the celebrations, Sobotka will fly to Washington to unveil a bust of Havel in the U.S. Congress. The former president died in 2011.

Back in Prague, some people are planning to mark the occasion with a protest at which they will hold up soccer-style red cards to show their displeasure with the president.

"What Zeman is doing is totally unacceptable behaviour," said Martin Prikryl, 40, a rock musician whose Facebook page urging people to join the protest has so far signed up 15,000 supporters.

In September, Zeman travelled to a forum on the Greek island of Rhodes whose founding president is Vladimir Yakunin, a Putin ally on a list of Russians subject to Western sanctions. While there, he spoke out against the punitive measures.

In a radio interview this month the president, 70, described Pussy Riot as "a pornographic group that is guilty of at least hooliganism."

Zeman used a Czech expletive to explain one of the meanings of the word "pussy" in English. He also said Mikhail Khodorkovsky, the former oil tycoon and Kremlin critic, had deserved his jail sentence for fraud.

Khodorkovsky, whose case was widely seen in the West as politicised, was freed from jail late last year shortly before two members of Pussy Riot, in an amnesty declared by Putin weeks before Russia hosted the Winter Olympics.