Co-hosted by the French and U.S. defence chiefs, Jean-Yves Le Drian and Ash Carter, the meeting will be attended by their Australian, British, Dutch, German and Italian counterparts 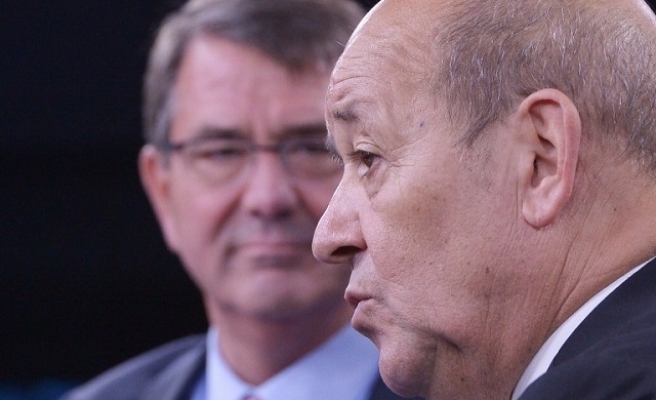 The defence ministers of seven countries leading the battle against the ISIL group in Iraq and Syria will meet in Paris on Wednesday to review their strategy and boost their resources.

Co-hosted by the French and U.S. defence ministers, Jean-Yves Le Drian and Ash Carter, the meeting will be attended by their Australian, British, Dutch, German and Italian counterparts.

British Defence Secretary Michael Fallon said the meeting would look at ways to "capitalise on the setbacks that Daesh (an alternative name for ISIL) has suffered in Iraq and tighten the noose around the head of the snake in Syria."

The seven countries have taken the lead in the air campaign against ISIL and the training of Iraqi forces to fight the extremists.

Russia, a staunch ally of Syrian President Bashar al-Assad, has not been invited, though U.S. Secretary of State John Kerry will discuss Syria with his Russian counterpart Sergei Lavrov in Geneva on Wednesday.

Moscow's air campaign, which it claims is targeted against ISIL, has been criticised for focusing on the moderate opposition to Assad.

"We've had estimates of several hundred civilians killed now through the use of unguided munitions in civilian areas, clearly aimed at opposition groups that are fighting Assad, and that I deplore," he added.

A French defence source said the ministers would look at ways to "up the tempo" of the air campaign, which began in 2014, adding that he hoped the meeting would become a regular event.

ISIL has seen some setbacks, losing around a quarter of its self-proclaimed caliphate, including the Iraqi city of Ramadi to U.S.-backed local forces last month.

The U.S. this week claimed to have leaked ISIL documents, showing the group had cut fighters' pay by half since the coalition stepped up bombing of oil production, a key source of revenue for the group.

- A lack of ground forces -

But the coalition faces major challenges, particularly the lack of ground forces willing to fight ISIL in Syria, since most groups are focused on toppling Assad.

"The sooner the civil war is brought to an end the better, and then we can all focus on the enemy that is Daesh," said Fallon.

"That is going to take time, we don't have what's available in Iraq. We don't have a New Model Army standing around the walls of Raqa waiting to move in. But that shouldn't delay us in doing what we can from the air."

Carter has repeatedly urged other countries in the approximately 60-member coalition to step up their participation, particularly Arab and Gulf countries that are more focused on fighting Iran-backed forces in Yemen.

ISIL is spreading worldwide, notably in Libya, where political chaos has allowed the group to build a 3,000-strong force.

Libya will be discussed at Wednesday's meeting, but no concrete proposals are on the table, a U.S. military source said.

But Western forces remain reluctant to get too deeply involved, fearing a repeat of the quagmire of previous campaigns in Afghanistan and Iraq.

Australia has already ruled out any increase to its military contribution, and Canada was pointedly absent from Wednesday's meeting after its new government said it would pull out of the bombing campaign.

UN-brokered Syrian peace talks including Moscow are tentatively set for next Monday in Geneva, but the main parties have yet to agree on who will represent the Syrian opposition.