As Calais 'Jungle' being taken down, a new refugee camp to open nearby 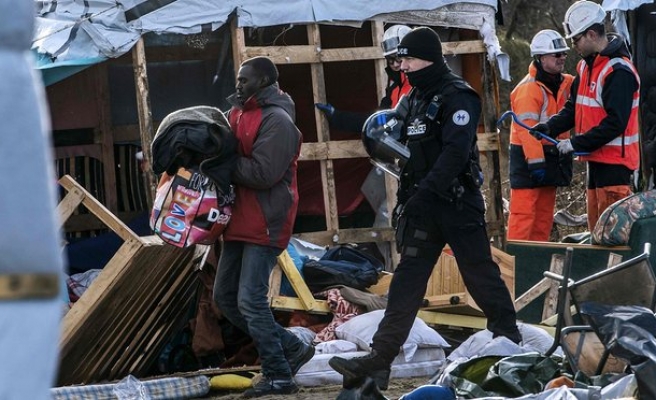 A second week of demolition was underway on Monday in the Calais refugee camp known as the "Jungle" while France's first international-standard refugee camp was set to open further along the coast.

A group of children tried to offer white roses to the line of riot police holding back refugees and volunteers as workers resumed the dismantling of makeshift shelters in the Calais camp in northern France.

Meanwhile, several kilometres away on the coast, the town of Grande-Synthe was preparing to open France's first-ever refugee camp to meet international humanitarian stands on Monday, despite official opposition.

Doctors Without Borders (MSF) has so far built a little over 200 of 275 planned cabins at the site to house at least 1,500 people -- many of whom are fleeing the demolition in Calais.

The camp also has proper showers and toilets.

Thousands of refugees -- mostly Kurds from Iraq -- have been camped out at Grande-Synthe for months in conditions that are even worse than those in the Jungle.

The local mayor has fought to gain the right to build the new camp against the wishes of the French government.

Back in the Calais camp, a group of nine Iranians who last week stitched their mouths shut in protest at the demolition, said Monday they were carrying out a hunger strike.

Some two hectares (five acres) of the Jungle were destroyed last week, and authorities said it could take a month or more to demolish the southern half of the camp.

The refugees are desperate to reach Britain, where many have family or community ties and see better hopes of gaining employment or education.

Most have turned down offers from the French government to move into heated containers alongside the Jungle, or into accommodation centres elsewhere in France, fearing doing so would end their dreams of reaching Britain.