Fighting broke out between deputies in Ukraine's parliament, delaying a debate on a possible resolution as violence also flared again in Kiev 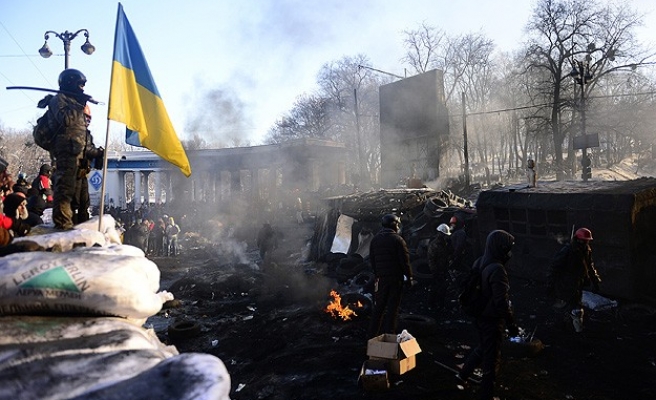 Fighting broke out between deputies in Ukraine's parliament on Friday when the speaker declared a pause, delaying a debate on a possible resolution calling for President Viktor Yanukovich's powers to be reduced.

Several deputies exchanged blows as chaos descended on the chamber for several minutes. The speaker, Yanukovich ally Volodymyr Rybak, then left the chamber but some of the deputies continued the debate.

"Participants in the mass disorder opened fire on police officers and tried to burst through in the direction of the parliament building," a police statement said. It did not say whether riot police had returned fire.

After visiting European Union foreign ministers suspended talks at dawn, the presidential press service said an agreement with the opposition would be signed at noon (1000 GMT) but gave no details.

Armed police entered the parliament building while lawmakers were holding an emergency session but were forced out, opposition leader Arseny Yatsenyuk said.

Ukraine, a sprawling country of 46 million, faces the risk of civil war or even a break-up, and rage has spread even into the parliamentary chamber. Members exchanged punches when speaker Volodymyr Rybak tried to adjourn proceedings.

Opposition deputies were angered because it would mean delaying a possible vote on a resolution pressing for constitutional changes to restrict the president's powers. The speaker left the chamber and debate continued.

Polish Prime Minister Donald Tusk, whose foreign minister is one of the mediators, cautioned that there was only a tentative accord so far. "The agreement has not yet been reached. What's been settled is the agreement's draft," Tusk told reporters in Warsaw.

French Foreign Minister Laurent Fabius, who was involved in the mediation effort earlier in the night, said the opposition needed to consult.

"The opposition wants to consult with some of its members, which is entirely understandable," he told Europe 1 radio. "In this sort of situation, as long as things haven't really been wrapped up, it's important to remain very cautious."

Anti-government protesters encamped in Independence Square were deeply sceptical of any announcement from the Russian-backed president.

After 48 hours in which the fate of Ukraine was fought out in the square, with at least 75 people killed, the Russian-backed Yanukovich was rapidly losing support.

The deputy chief of the armed forces resigned and opposition deputies in parliament voted to overturn severe anti-terrorist laws enacted by Yanukovich's government this month and ordered security forces back to barracks.

In another sign of the severity of the crisis, ratings agency Standard & Poor's cut Ukraine's credit rating for the second time in three weeks on Friday, citing the increased risk of default.

S&P said latest developments in the crisis made it less likely that Ukraine would receive desperately needed Russian aid. Ukraine cancelled a planned issue of 5-year Eurobonds worth $2 billion, it told the Irish Stock Exchange where the debt would have been listed. Kiev had hoped Russia would buy the bonds to help it stave off bankruptcy.

The ministers were trying to broker a deal on a temporary government and early elections this year after gun battles between police and protesters caused the worst bloodshed since Ukraine emerged from the collapsing Soviet Union 22 years ago.

German Foreign Minister Frank-Walter Steinmeier and Poland's Radoslaw Sikorski stayed on in Kiev on Friday to try to secure a deal.

The health ministry said 75 people had been killed since Tuesday afternoon, which meant at least 47 died in Thursday's clashes. That was by far the worst violence since Ukraine's independence.

The trio of visiting foreign ministers met Yanukovich and the opposition after EU colleagues in Brussels imposed targeted sanctions on Ukraine and threatened more if the authorities failed to restore calm.