Deputy of ousted Ukraine leader beaten by mob in Odessa

Nestor Shufrich, a deputy of Yanukovich's Regions Party and a critic of Kiev's military campaign against pro-Russian rebels in eastern Ukraine, was left bleeding from blows to the face. 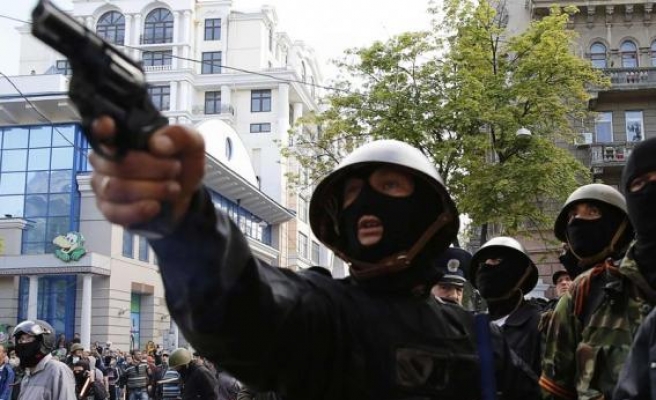 A deputy from the party of ousted Ukrainian president Viktor Yanukovich was attacked and beaten by a crowd in the Black Sea resort of Odessa on Tuesday during political campaigning for a parliamentary election set for Oct. 26.

Nestor Shufrich, a deputy of Yanukovich's Regions Party and a critic of Kiev's military campaign against pro-Russian rebels in eastern Ukraine, was left bleeding from blows to the face, his shirt ripped to the waist, before he was bundled into a van by his bodyguards.

Supporters said Shufrich had been campaigning on behalf of an opposition bloc running against pro-Western and Ukrainian nationalist parties in the election.

The crowd of about 20 activists, some of them masked and wearing camouflage fatigues and wearing the armbands of the right-wing nationalist "Right Sector" group, cornered the 47-year-old Shufrich as he tried to enter the main regional municipal building in Odessa to give a statement to the media.

Tensions between pro-Russian activists and supporters of Ukrainian unity have run especially high in Odessa since more than 40 people were killed during clashes there in May, most of them caught in a building that was set on fire.

Odessa lies on the coast to the west of Crimea, Ukraine's Black Sea peninsula which Russian President Vladimir Putin annexed in March after the overthrow of his ally Yanukovich.

When Shufrich was surrounded by the crowd, his bodyguards fired in the air to disperse the group but they themselves were pushed back. Video footage of the attack showed a man pinching Shufrich by the nose as his bodyguards called for a corridor to be created to let him be taken away.

As Shufrich was dragged through the crowd, some of whom were swinging blows at him, there were cries of "Putin's bitch!" and "Let's finish the scum off !"

As he neared the van, a man struck him twice in the face.

Shufrich, a former minister of emergencies, was a loyal supporter of the Moscow-backed Yanukovich, who was ousted by street protests in February after turning his back on the long-planned signing of a political and trade pact with the European Union in favour of closer ties with Vladimir Putin's Russia.

Appearing later with a plaster covering his right eye, Shufrich said his attackers had threatened to seize him and throw him in a trash container - a fate which befell Vitaly Zhuravsky, another prominent Regions Party deputy, earlier this month.

Shufrich vowed to return to Odessa, saying: "We will not leave people face to face with this lawlessness."

He has strongly criticised Kiev's military offensive to try to quell pro-Russian separatist rebellions in the east of the country and was among the first Ukrainian officials to meet separatist leaders early in the crisis.

A fragile ceasefire is now in force in eastern Ukraine.

Yanukovich's successor as president, Petro Poroshenko, has irked Moscow by seeking to move Ukraine closer to the EU. He has signed the political and trade pact rejected by Yanukovich.