Despite risks, residents trickle back to besieged Ukrainian city

Some residents had already been returning to Donetsk since rebels opened a new front against the Ukrainian army near the Sea of Azov further south. 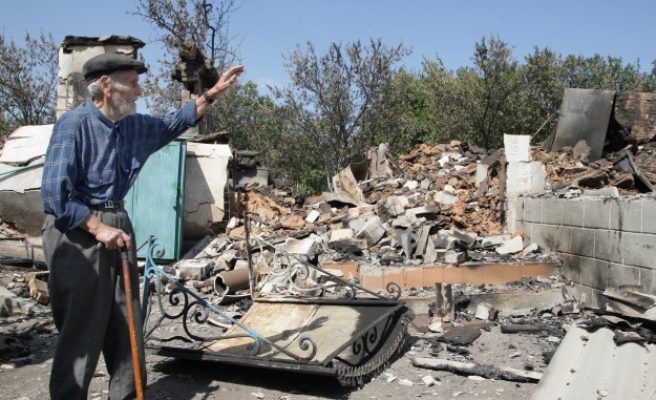 University lecturer Olga queued for 40 minutes in a line of cars at a roadblock outside Donetsk on Thursday as she made her way home to the besieged rebel-held city in eastern Ukraine.

Ukrainian forces have not stopped shelling parts of the city at the heart of a separatist rebellion against Kiev but, three weeks after she fled, Olga believes it has become safer there because the main fighting has moved south.

"They summoned me back to work, said it's a bit quieter in the city now. So we decided to head back home," said the middle-aged woman, squeezed into a small car with her son, husband and two elderly relatives.

The family left Donetsk after shelling reached the centre of the city during heavy fighting between the pro-Russian rebels and advancing Ukrainian troops.

The city had a pre-conflict population of 1 million but a rebel leader said in late August he thought about half of that number had fled the violence.

President Petro Poroshenko said he would order Ukrainian forces to cease fire on Friday if agreement is reached at peace talks, and pro-Russian rebel leaders in the east of the country later said they would do the same.

But some residents had already been returning to Donetsk since rebels opened a new front against the Ukrainian army near the Sea of Azov further south.

The advance has tied up more Ukrainian forces in the south and halted the advance on Donetsk. Kiev and the West say the opening of a new front was possible only with the help of Russian soldiers sent by Moscow.

A large unexploded shell sticking out of the road welcomes those arriving in Donetsk from the Karga roadblock west of the city.

"It's been like that for about a week now, long lines of cars. People are slowly coming back," said a rebel fighter who was inspecting cars passing through the checkpoint and gave his name as Mikhail and used the nickname "The Eighteenth".

"I don't know what will happen next but for now the situation is a bit more stable here in Donetsk."

Some cars carry signs reading "children" on their front windows, enabling them to pass through road blocks quickly.

Rebels often drive cars with no registration plates but keep their emergency lights on. Civilians quickly move their cars out of the way.

In Donetsk, a rebel fighter calling himself "Miner" said: "Azov has given us great relief. There is much less shelling of residential districts. And it's noticeable there are more people at bus stops and in shops."

Some people, most of whom declined to give their full names for fear of retribution, said they had been forced to come back home.

"I left and spent a week with my relatives. But I have no more money and they don't need an old woman with no money," said Lyudmila, a pensioner. "I'm afraid to be here but what can you do?"

Others said they returned for the start of the academic year on Sept. 1 though schools remained closed in the rebels' self-proclaimed Donetsk People's Republic. Local leaders say they will let the school year begin only when Ukrainian troops have been forced to retreat a safe distance.

CALMER BUT NOT CALM

The city still feels largely deserted, with interruptions in supplies of running water and electricity, and shortages of gas and petrol.

Civilian casualties and damage to homes and infrastructure have left many in Donetsk angry with authorities in the capital Kiev, and the separatists feed on their anger to win support.

The separatist leadership delivers some food and medicine to people in bomb shelters and tries to provide a feeling of normalcy to those living in Donetsk.

Symbolically, they say, they recently changed the Wifi password in one of their headquarters from "revolution" to "civilisation".

Unlike before, the city centre has been largely calm in recent days though fighting has continued in the outskirts, including around the airport where rebel forces have surrounded Ukrainian troops.

Roman, a 32-year-old driver, his wife and child have moved to the city from a bomb shelter in Spartak, a district located near the airport.

"It's a million times better here in the city, you can sometimes hear the shells flying over but you don't see them landing next to where you stand," he said.