The right-wing party Svoboda, hostile to Russian policy, said the dead man was one of its local activists. 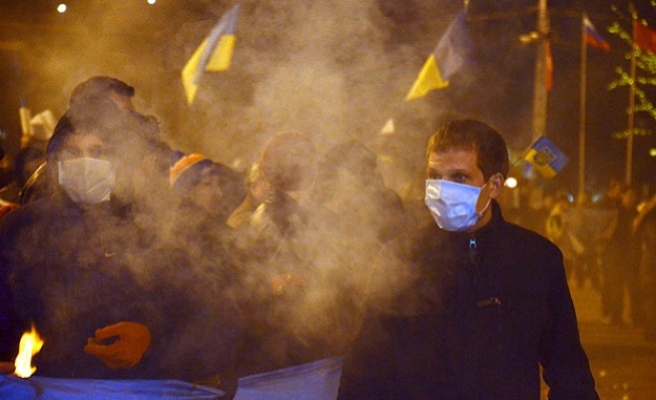 The new governor of the eastern Ukrainian region of Donetsk on Friday said Russians were behind violent clashes between rival demonstrators in which one man was killed, and accused Moscow of distorting the truth in its account of what happened.

Dmitriy Chernyavskiy, 22, was stabbed to death in Donetsk, the heartland of Ukraine's Russian-speaking coalfields, after pro-Russian protesters clashed with others favouring European integration and denouncing Russia's incursion into Crimea.

"Sadly, we note that there were, according to police, a lot of people concentrated there who were not from Ukraine," Serhiy Taruta told journalists in an oblique reference to Russia.

Taruta also took exception to a Russian foreign ministry statement which said the clashes on Thursday night showed the Ukrainians had lost control of the situation and Russia reserved the right to protect its compatriots in eastern Ukraine.

"The statement by the (Russian) foreign ministry is not objective and distorts the real situation," said Taruta, a steel tycoon and one of several oligarchs appointed by Ukraine's new rulers to take control of possibly restive regions.

The violence was the worst to hit the former Soviet state since the removal of a Moscow-backed president last month and came as Ukraine's new rulers sought Western help to secure a Russian troop withdrawal from Crimea.

The clashes, following Russian President Vladimir Putin's assertion this month that Russia had the right to protect Ukraine's Russian-speaking population, stoked suspicions that Moscow possibly harbours plans for a broader incursion into Ukraine beyond Crimea.

The right-wing party Svoboda, hostile to Russian policy, said Chernyavskiy was one of its local activists.

Journalists saw pro-Russian demonstrators throw eggs, smoke bombs and other missiles and break through a police cordon to beat their opponents with batons. Organisers of the pro-Russia protest said their supporters were also attacked.

"The first four organisers and ringleaders of the mass disorders were found and detained during the night," Interior Minister Arsen Avakov said on his Facebook page.

"An investigation is continuing. Given the initial evidence overnight, these detentions are only the beginning. We will not go easy on bandits with knives ... An investigation into police actions during these events will also proceed."

Donetsk observed a day of mourning on Friday for Chernyavskiy.

Ukrainian officials have accused Russia of supporting groups in the Donetsk region which favour rule from Moscow and of sending militants over the border.

Three weeks ago, about 100 people were killed in the capital Kiev, many of them by police gunfire, in clashes that prompted the flight of Moscow-backed president Viktor Yanukovich.

Yanukovich triggered the protests in November by rejecting a trade deal with the European Union in favour of economic aid from Russia. The Kremlin says its intervention in favour of ethnic Russians in Crimea was prompted by Yanukovich's removal in what it describes as a coup by right-wing nationalists.