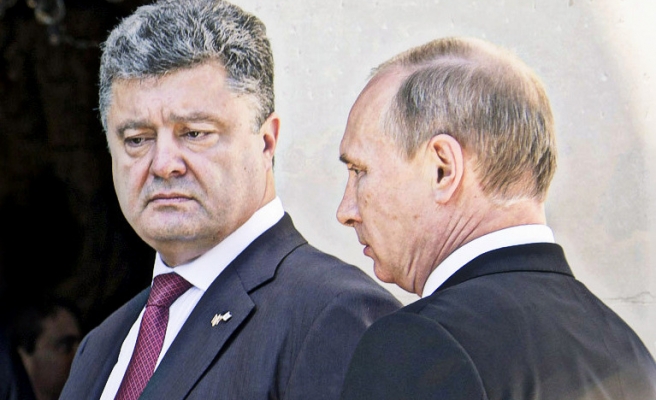 Ukrainian President Petro Poroshenko warned Monday he had no trust in Russia's Vladimir Putin and urged the army to prepare "for the worst" despite a new truce in the separatist east.

The pro-Western Ukrainian leader's comments to servicemen in Kiev came ahead of this week's Defenders of the Fatherland Day -- an occasion of special significance in the post-Soviet republic that views the 18-month uprising in the east as Russian "aggression".

A new September 1 truce has significantly calmed the industrial region and put a near end to clashes that have killed more than 8,000 people and driven 1.5 million from their homes.

The terms of previous agreements require the polls to be followed by a Russian military pullback -- despite Moscow's claims of never having provided the rebels with either weapons or troops.

But Poroshenko said the step-by-step process that Putin has publicly endorsed could fall apart at any moment because of the Russian president's record of unpredictability and desire to wield greater influence over former Soviet lands.

"I do not trust Putin at all," Poroshenko said in televised comments.

"I do not trust his puppets and I do not trust their promises at all", Poroshenko said in reference to the insurgents in the Lugansk and Donetsk regions.

Poroshenko ominously added: "Each moment, we should be prepared for the worst".

Kiev's forces and Lugansk fighters are currently pulling back their smaller weapons from a demarcation line separating the separatist-run regions -- which together are about the size and population of Wales -- from the rest of Ukraine.

The Donetsk region militia are scheduled to begin moving back their smaller weapons from the 30-kilometre-wide (19-mile-wide) buffer zone starting next week.

A much earlier agreement to withdraw larger-calibre mortars and artillery has never been implemented in full.

An incident Saturday underscored the fragility of the latest in a series of ceasefire agreements.

The rebels said Ukrainian fire killed one militant and wounded two others near an airport destroyed by months of fighting on the outskirts of the separatists' de facto capital of Donetsk.