British police arrested more than 100 people overnight in London in a second night of violence that followed some of the worst disorder seen in the capital for years. 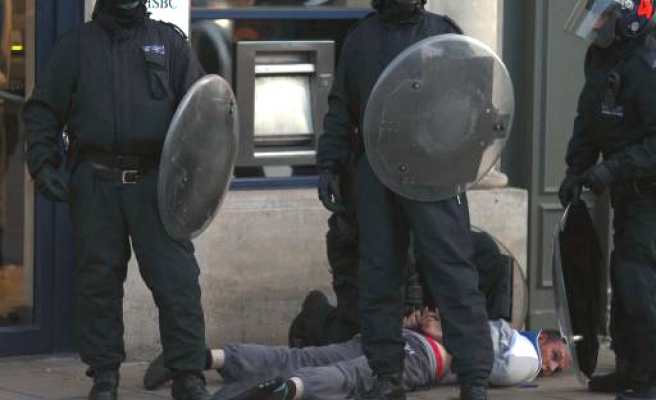 British police arrested more than 100 people overnight in London after shops were looted and officers attacked in a second night of violence that followed some of the worst disorder seen in the capital for years.

Nine police were injured in what police called "copycat criminality" in several parts of London on Sunday night, although the damage appeared to be on a much smaller scale than Saturday's rioting in Tottenham, in the north of the capital.

Police Commander Christine Jones said there had been "sporadic disorder" in a number of boroughs through the night, with more than 100 people detained, on top of the 61 arrested on Saturday night and Sunday morning.

The first night of protest began after a vigil for a 29-year-old man shot dead by police as they tried to arrest him in Tottenham on Thursday. Britain's police watchdog is investigating the incident.

On Sunday night, police said there was more looting in north, east and south London. Around 50 youths damaged shops in Oxford Street, one of the main shopping districts in central London. In Brixton, south London, several shops were looted and police kept the area cordoned off on Monday morning.

Politicians and police blamed the first night of violence on criminal thugs but residents attributed it to local tensions and anger over hardship.

Residents said they had to flee their homes as mounted police and riot officers on foot charged the crowd to push rioters back.

The Metropolitan Police, which will handle next year's London Olympic Games in what is expected to be Britain's biggest peacetime police operation, faced questions about how the trouble had been allowed to escalate.

Police and community leaders said local people had been horrified by what happened and appealed for calm.

Local member of parliament David Lammy said many of those arrested had come in from outside the area and organised the disorder on social messaging sites.

"The weekend's violence was not a race riot, it was an attack on the whole of the Tottenham community, organised on Twitter," he wrote in the Times newspaper on Monday. "The grief of one family must never be hijacked to inflict grief on others."

The riots come amid deepening gloom in Britain, with the economy struggling to grow while the government is imposing deep public spending cuts and tax rises brought in to help eliminate a budget deficit that peaked at more than 10 percent of GDP.

"Tottenham is a deprived area. Unemployment is very, very high ... they are frustrated," said Uzodinma Wigwe, 49, who was made redundant from his job as a cleaner recently.

Tottenham includes areas with the highest unemployment rates in London. It also has a history of racial tension with local young people, especially blacks, resenting police behaviour including the use of stop and search powers.

The disorder was close to where one of Britain's most notorious race riots occurred in 1985.

Locals said there had been growing anger recently about police behaviour. "I've lived in Broadwater Farm for 20 odd years and from day one, police always pre-judge Turks and black people," said a 23-year-old community worker of Turkish origin who would not give his name.

Fingers were also pointed at the police for failing to anticipate the trouble, although Commander Hanstock said there had been no hint of what was coming.

The London force has been heavily criticised for its handling of recent large protests against austerity measures, while its chief and the top counter-terrorism officer have quit over the handling of the News Corp phone-hacking scandal.