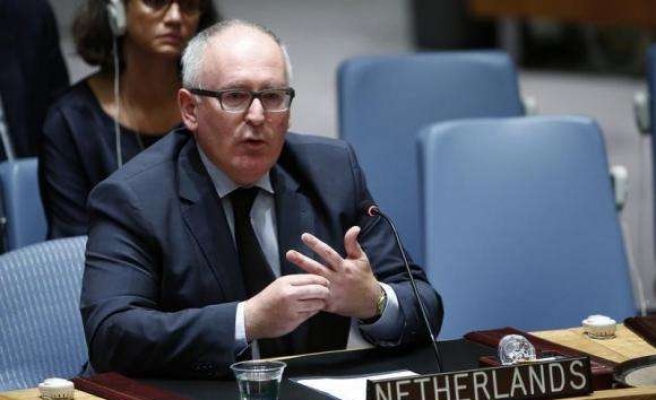 The announcement was made after Timmermans met incoming Commission President Jean-Claude Junker in Brussels about taking up a senior role in the European Union's executive body.

Rutte did not specify which post Timmermans had been nominated for, but Dutch media on Tuesday said he was discussing taking up a vice president post in charge of inter-institutional relations, reform and administering the Commission's 50,000-strong civil service.

Timmermans gained international prominence with the emotional speech he gave at the United Nations following the July 17 shooting down over eastern Ukraine of Malaysian Airlines flight MH17, which had 196 Dutch nationals on board.

Jeroen Dijsselbloem, who heads the Eurogroup of euro zone finance ministers, had been mentioned earlier as a possible Dutch candidate, as had Lilianne Ploumen, the trade and development minister.

Timmermans, who speaks Russian and served as political officer at the Dutch Embassy in Moscow, will be the first Dutch Labour Party commissioner in many years, after a long line of conservatives to have served in Brussels.

Timmermans is an experienced Brussels hand who represents his country's last best hope of securing a top job in the European Union's executive.

He is a staunch pro-European and a talented linguist even by the standards of the famously polylingual Dutch.

He speaks virtually accentless English, good French and fluent Russian, which he learned as part of compulsory military service as a young man, when he was trained as an interrogator of Russian prisoners of war.

"He's a veteran diplomat with an enormous track record, a Russia expert and someone who is highly valued by his staff," said Louise van Schaik of Clingendael, the Netherlands Institute of International Relations.

While Jean-Claude Juncker, the new president of the European Commission president has not yet begun doling out portfolios, Dutch media have said Timmermans is in the running for a powerful vice-president position in charge of institutional reform and the Commission's 50,000-strong civil service.

That is a managerial role to which he would be well suited, accordingly to colleagues.

"He's the best foreign minister I've ever served under," said one current Dutch ambassador, praising him as an effective and supportive manager. "He gives you his trust and inspires you ... and he has empathy and the ability to explain difficult issues to non-experts."

Some have criticised him for vanity and delivering speeches peppered with recherche literary quotations.

But he nonetheless has a strong personal following unusual in Dutch politics. He does much of his communications with the public via his Facebook page, where an army of 159,000 fans frequently write posts wishing him well and reminding the globe-trotting foreign minister to catch up on his sleep.

When Malaysian Airlines flight MH17 was shot down over eastern Ukraine, killing 196 Dutch nationals, he changed his profile picture to black and was followed by many.

His performance throughout the crisis earned him worldwide recognition and made him the most popular member of the government.

But Timmermans, 53, may be holding out for a bigger role than the one Dutch media have speculated that he will assume.

With his language skills and his prior stints in Brussels and Moscow, Dutch analysts hope he could be holding out for a role dealing with the EU's increasingly tense relations with the Eurasian giant to its east.

A powerful and emotional speech he gave at the United Nations following the downing of MH17 was credited with swinging many European countries behind tougher sanctions against Russia, which backs the rebels many accuse of accidentally shooting down the passenger jet.

"Did they lock hands with their loved ones, did they hold their children close to their hearts," he asked the diplomats gathered in New York, inviting them to imagine the passengers' last moments.

"Did they look at each other in the eyes one final time in a wordless goodbye?"