The outcome is being closely watched by both the West and Moscow, and a Dutch 'No' to the two-year-old treaty with Kyiv could pose a headache for the EU 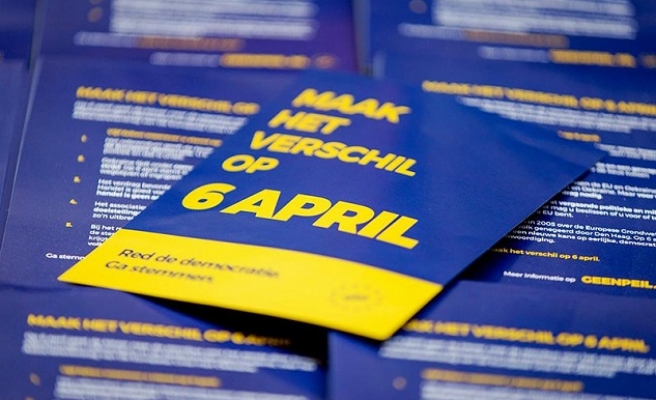 Dutch people began voting Wednesday on whether to back a key EU pact with Ukraine in a referendum triggered by grassroots eurosceptic groups and seen as a yardstick on ties with Brussels.

Polling stations opened across the country from early Wednesday, with a small trickle of voters queueing to cast their ballots in the non-binding popular vote on whether the Dutch approve closer ties with Kyiv.

The outcome is being closely watched by both the West and Moscow, and a Dutch "No" to the two-year-old treaty with Kyiv could pose a headache for the European Union.

"I think it's good to have a referendum, to be able to say what we think of Brussels. It's important," one voter, who identified himself only as Bert, 49, said after voting.

Opinion polls on the eve of the vote on the EU's so-called Association Agreement with Ukraine gave the "No" vote a slight edge.

And after a slow-to-start, low-key campaign, many observers were watching to see if the 30-percent turnout of the 12.5 million eligible voters needed to ensure the vote is valid would be met.

One Ipsos poll said some 37 percent polled over recent days said they would vote against the deal, around 33 percent were in favour and the rest remained undecided.

The vote is also being anxiously watched in Ukraine, which has moved to knit closer ties with the West since the 2014 ouster of a Moscow-backed president who had rejected the cooperation deal.

Ukrainian President Petro Poroshenko voiced confidence the Dutch people would support the pact, and warned against his country becoming a victim of what he called "an internal Dutch discussion about the future of the European Union".

But in an early call, anti-immigrant far-right Dutch MP Geert Wilders tweeted to supporters Wednesday: "Everyone vote today. And vote against!"

The referendum's eurosceptic Dutch organisers have admitted the vote is essentially not about Ukraine, but a handy hook to push a broader anti-EU agenda and "give citizens more say in Brussels".

It was triggered after organisers used new legislation allowing citizens to voice opinions on legislative decisions if they garner more than 300,000 signatures.

The Netherlands is now the only country in the 28-nation EU still to ratify the accord and the deal has been given the thumbs up by both the upper and lower houses of the Dutch parliament.

"I see the agreement with Ukraine a bit more like collateral damage" said Aaron Matta, senior researcher at The Hague Institute for Global Justice think-tank.

He warned of wider repercussions of a "No" vote win, for Dutch Prime Minister Mark Rutte's government -- which currently holds the rotating EU presidency -- and Kyiv.

If there is a "No" vote, the Dutch government "will have to save face... having been placed in an awkward situation," Matta said.

"The Netherlands will perhaps have to find some way of opting out of the agreement," he said.

Both the Liberal Rutte and his junior Labour coalition partner have called for a vote in the agreement's favour.

And European Commission chief Jean-Claude Juncker has warned a "no" vote "could open the doors to a continental crisis".

But the Dutch government has not done any active campaigning and has repeatedly said it will await the outcome before deciding its next steps.

Russia, which backs separatist rebels in Ukraine's east, resents Kyiv's tilt towards the West and would relish a vote to prevent it from developing ties with Brussels.

And a "No" win could also be seen as a bellwether for Britain's own June referendum on whether to leave the EU, dubbed a "Brexit."

Nigel Farage, leader of the anti-EU UK Independence Party, said in Amsterdam on Monday that a vote against the pact "will send a big message to the British electorate that we are not alone in thinking something has fundamentally gone wrong in the direction of the European Union."