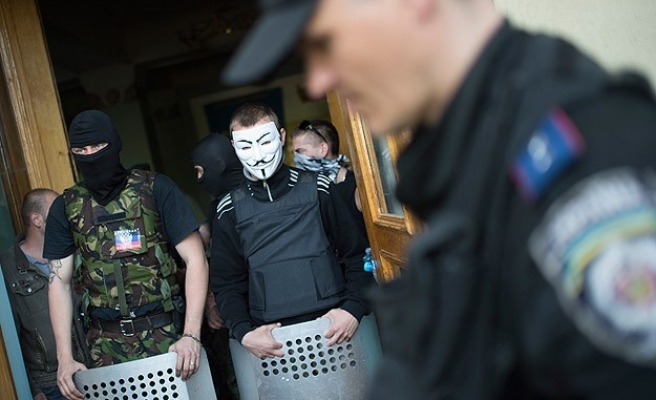 The gunmen, who turned up at dawn, took control of the offices in Horlivka, a town of almost 300,000 people, said a Reuters photographer. They refused to be photographed.

The heavily armed men wore the same military uniforms without insignia as other unidentified "green men" who have joined pro-Russian protesters with clubs and chains in seizing control of towns across Ukraine's Donbass coal and steel belt.

Some 30 pro-Russian separatists also seized a city council building in Alchevsk, further east in Luhansk region, Interfax-Ukraine news agency said. They took down the Ukrainian flag and flew a city banner before allowing workers to leave.

Attempts to contain the insurgency by the government in Kiev have proved largely unsuccessful, with security forces repeatedly outmanoeuvred by the separatists. The West and the new Ukrainian government accuse Russia of being behind the unrest, a charge Moscow denies.

Daniel Baer, the U.S. ambassador to the OSCE, a European security watchdog which has monitors in the region, told reporters in Vienna: "I think it's very clear that what is happening would not be happening without Russian involvement."

A police official in Donetsk, the provincial capital where separatists have declared a "People's Republic of Donetsk", said separatists were also in control of the Horlivka police station, having seized the regional police headquarters earlier in April.

The murder of a town councillor from Horlivka who opposed the separatists was cited by Kiev last week among reasons for launching new efforts to regain control of the region.

Wednesday's takeover followed the fall of the main government buildings on Tuesday further east in Luhansk, capital of Ukraine's easternmost province, driving home just how far control over the densely populated region has slipped from the central government in Kiev.

"They've taken them. The government administration and police," the police official said of Horlivka.

The town sits just north of Donetsk, unofficial capital of the whole Donbass area, where mainly Russian-speaking separatists have called a referendum on secession for May 11.

Many hope to follow Crimea's break from Ukraine in March and subsequent annexation by Russia, following the overthrow of Ukraine's Moscow-backed president Viktor Yanukovich in late February in a tug-of-war between the West and Russia over the strategic direction of the former Soviet republic.

The Donbass region is home to giant steel smelters and heavy plants that produce up to a third of Ukraine's industrial output. An armed uprising began there in early April, with Kiev almost powerless to respond for fear of provoking an invasion by tens of thousands of Russian troops massed on the border.

Many Russian-speaking business "oligarchs" from the Donbass backed Yanukovich and exercise great influence over the region.

On Wednesday, the most powerful of these, Ukraine's richest man Rinat Akhmetov issued a formal statement saying he remained committed to his investments in the Donbass and to keeping the region as part of Ukraine.

Oleksander Turchynov, Ukraine's acting president until after an election on May 25, reiterated on Wednesday that police were incapable of reasserting control in the region.

"Our main task is to prevent the terrorist threat from spreading to other regions of Ukraine," he told a meeting of regional governors in Kiev.

"The Russian leadership is doing everything to prevent the election. But the election will take place on May 25," he said.

The OSCE special envoy to Ukraine, Tim Guldimann, told Reuters he was cautiously optimistic about the possibility of holding an election which Kiev says Russia is trying to wreck:

"What's positive is that no political parties have so far called for a boycott of the election," Guldimann said. "Governors and mayors in the east have also indicated that elections will be carried out."

There were further signs on Monday that Russia is paying an economic price for its involvement in Ukraine. The International Monetary Fund said international sanctions imposed on Moscow over the crisis in Ukraine were hurting the economy.

The IMF cut its 2014 growth forecast for Russia to 0.2 percent from 1.3 percent and forecast capital outflows of $100 billion this year.

The IMF mission chief to Russia, Antonio Spilimbergo, also told reporters that Russia was "experiencing recession" and that a resolution of the Ukraine crisis would significantly reduce Russia's own economic uncertainties.

"If you understand by recession two quarters of negative economic growth then Russia is experiencing recession now," Spilimbergo said.

Ukraine is also suffering from the turmoil, with economic output falling 1.1 percent year-on-year in the first three months of 2014, according to government figures released on Wednesday. Gazprom said Ukraine's unpaid bill for gas supplied by the Russian energy giant was now $3.5 billion.

However, the European Union said it was ready to provide economic aid to Ukraine along with the IMF.

Father Vitaly says he prays every day for the armed men who now wield power in Slaviansk, stronghold of pro-Russian separatists who have seized key buildings in a dozen towns across eastern Ukraine this month.

"There's a point at which you just can't take it any more and you have to pick yourself up and stand up for yourself," the bearded, broad-shouldered Orthodox priest said of his hostility to the Ukrainian leadership which has taken power in Kiev.

Standing under the dark blue cupolas of his church on the outskirts of town, Father Vitaly denies accusations he has an active role in the uprising - including an allegation that he even provides a logistics and command base for the rebels.

But he makes no apology for aiding parishioners who have taken up arms against the new government in Kiev and dismisses suggestions that they - or he - takes orders from Moscow.

Vitaly, aged in his 40s and with his thinning brown hair tied back in a traditional clerical knot, says they are merely carrying out the will of Slaviansk, where Russian is the first language of most of the 130,000 residents. Many are alarmed by leaders in Kiev seeking to shift the country of about 45 million westward, away from Russia and toward the European Union.

Some residents, however, say Vitaly, whose church follows the leadership of the Orthodox patriarch in Moscow, has provided more than just spiritual support for the armed uprising, in fact throwing open the church's property to gunmen who are currently holding several detainees, including seven foreign OSCE observers.

The Moscow patriarch is closely associated with President Vladimir Putin and his project to revive a greater Russian national idea. Now some priests in Ukraine's industrial east seem to making common cause with rebels, many of whom hope to follow Crimea into breaking with Kiev and into annexation by Russia.

In a mirror-image of the support that clergy loyal to the rival patriarch in Kiev lent to pro-Western protesters in the capital, priests in Slaviansk recite prayers at barricades erected by pro-Russian separatists around the police station.

Before she was detained by the rebels, the city's mayor, Nelya Shtepa, accused Vitaly of inviting gunmen to operate from the grounds of his church's tree-ringed recreational centre:

Reuters journalists saw dozens of armed men around the church centre on April 12, when the separatists seized key public buildings, and in the days that followed.

Vitaly, a well-known local figure whose restored, century-old Church of the Holy Resurrection is one of at least five in the city, said Shtepa was pursuing a personal vendetta against him.

There were some gunmen in the grounds but he had not invited them: "I was told there were armed men on the grounds of the centre," he told Reuters. "I went and asked them: 'Please boys, go somewhere else. Don't put the Church in this position'."

Those who stayed, he added, did so to protect church property and the priests. In the days after the rebel takeover of the town, a sandbag barricade went up by the leisure centre, and at least one man armed with a Kalashnikov rifle stood guard.

"The Orthodox Centre is the activists' headquarters," said a Ukrainian security officer familiar with the separatists.

"It's the centre of their operations, communications and weapons storage. Although it's not consecrated ground itself, it belongs to the church."

Just off the city's main square, at St. Andrew's, a small church aligned with the Kiev patriarchate, Father Sava said he saw the long arm of Russia behind events in Slaviansk:

"It's impossible not to see the influence of Moscow," he said, pointing a finger at the Moscow patriarchate. "The church supports what is happening here materially and spiritually."

Christianity has flourished since the collapse of Soviet communist atheism but the Ukrainian Orthodox Church split in the 1990s, reflecting in part the cultural, historic and language faultline that divides the country between east and west.

The breakaway Kiev patriarch has condemned Russian "evil" while Ukraine's Moscow-led hierarchy seems ambivalent - caught between its patriarch's closeness to Putin and a large Ukrainian flock, many of whom resent Russian political interference.

In Slaviansk, however, where critics of Moscow are keeping their heads down, many of Father Vitaly's parishioners say they welcome his overt support. By the barricades, where icons are taped to piled tyres, Nina, 60, fingers a cross around her neck.

"We are Orthodox Christians," she said.

"The church here stands behind us with their prayers. They understand us and what is right."