Assange has been holed up in Ecuador's Embassy in London for six weeks as he awaits a decision on his asylum request by the leftist government of Rafael Correa. 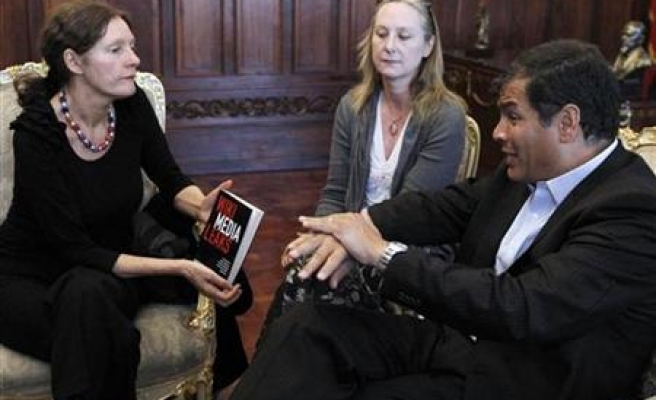 Ecuador wants to prevent Julian Assange's extradition to Sweden because it is disappointed that the Scandinavian country has turned down an offer to question the WikiLeaks founder in the Ecuadorean Embassy in London, a minister said on Wednesday.

Assange has been holed up in Ecuador's Embassy in London for six weeks as he awaits a decision on his asylum request by the leftist government of Rafael Correa.

The Australian anti-secrecy campaigner, who angered Washington in 2010 when his WikiLeaks website published secret U.S. diplomatic cables, is wanted for questioning in Sweden over sex crime allegations. He fears that if he is sent to Sweden he could be bundled off to the United States.

Ecuador has long said that it will take as long as needed to make a thorough analysis of Assange'sasylum request before making a decision. Foreign Minister Ricardo Patino on Monday vowed to wait until the end of the London Olympic Games on Aug. 12 to announce a decision.

He said Ecuador had invited Swedish authorities to question Assange in the Ecuadorean Embassy in London, which could give the former computer hacker a chance to avoid extradition to Sweden.

But following a meeting with Correa on Wednesday Patino said he had "unofficially" learned that Sweden had turned down the offer. He said he was disappointed about Sweden's decision because it "makes the situation more complicated."

"This makes it more difficult for us to make a decision that would mean that Mr. Assange would have totravel to Sweden," Patino told reporters outside the presidential palace.

Patino did not say if Ecuador is now more inclined to grant political asylum to Assange, but said his country's decision will seek to protect Assange's life and his right to freedom.

"This will be a factor to consider in the decision we have to make. Had we had a positive answer from the Swedish government then we would be considering taking a different kind of decision," Patino said.

The spokesman said the offer was made by Assange's Swedish lawyer Per Samuelsson, but that the prosecution authority had not been in contact with Ecuadorean officials. He said he was unaware if there had been any contacts at government level.

According to Julian Assange's mother, Christina Assange, who is in Ecuador to plead for her son's asylum request, the United States is bent on having the 41-year-old extradited, and that would only be possible if he is sent to Sweden first.

She fears that her son will face torture and even execution if deported to the United States.

"I'm here humbly as a mother to present some facts. Of course I'll be most grateful if asylum is granted to my son to save him from being hooked by the US government," she told reporters after a meeting with Correa on Wednesday.

Neither U.S. nor Swedish authorities have charged Assange with anything. Swedish prosecutors wantto question him about allegations of rape and sexual assault made by two WikiLeaks supporters in 2010.

Assange, whose distinctive platinum hair and high-flying friends have made him a global celebrity, says he had consensual sex with the women.

"Even though there isn't a trial, there aren't judicial proceedings against him, Sweden wants toimprison him ... That's why we asked the Swedish government to question him where he's now," Patino said as he expressed disbelief that Sweden had turned down the offer.