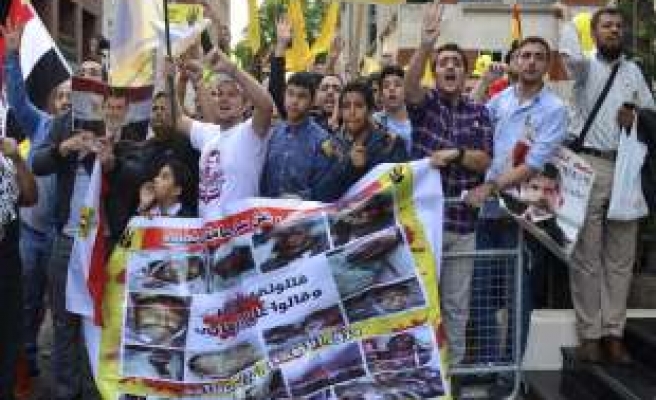 A protest against the military coup in Egypt as well as a celebration for the 40th anniversary of Egypt's 1973 military victory over Israel took place with the attendance of many British Egyptians in capital London on Sunday.

The demonstration organized by British Egyptians 4 Democracy (BE4D) was held in front of the Egyptian Embassy in London where people were chanting slogans in Arabic saying, "Sisi is a murderer", "The coup is terrorism", "Down down with the military rule", "If you ask who we are, we are the youth of January 25 revolution".

Pharmacist Alaa Mohamed who is also one of the organizers of the protest told Anadolu Agency that they hold protests and activities every single week all over the UK since the coup took place on 3rd of July.

As today was also the 40th anniversary of the October 6 victory, Mohamed said, "We are the Egyptian people saying that we love the Egyptian army. Today is celebration for the victory of what Egyptian army did on 6th of October, 1973, so its the 40th anniversay. We are saying that we are here backing our brave soldiers of the army, but we are against the military junta. The corrupt leaders that who are in intend driving country into a dangerous tunnel of the violence, of killing civilians, of killing Egyptians. People have been protesting for over 90 days now peacefully in the streets. We are here today to tell them 'we are with you'. We are always against the military coup and the military junta, they do not represent us."

Upon a question of how she was assessing the passive stance of Western countries over all the violence and massacre taking place in Egypt, she said that she was a British Egyptian and she was proud to say it. "But I am very ashamed of the stance taken by the Western countries and these democracies." She stressed that Western countries were not recognising the military coup in 2013 and it was very obvious that the military coup was illegal, "it doesn't have any legitimacy" added Mohamed, "they must stand with the Egyptian people in their request to what's real democracy and better Egypt."

Moreover, one of the activists, Buthaynah Fahmy told AA that she was an anti-coup and pro-democracy and added, "I did not vote for Morsi but I think that he has the rights to lead the country cause he was the democratically elected president."