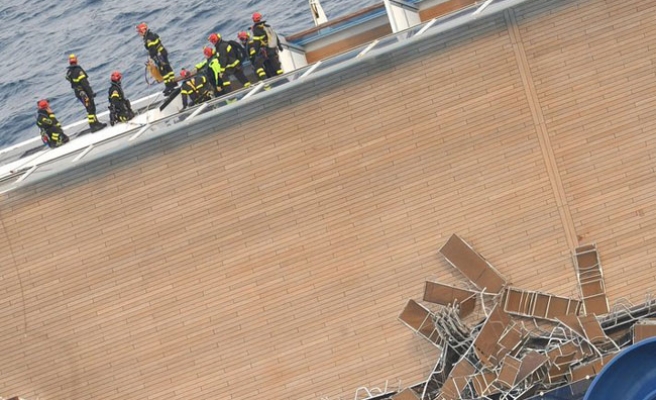 Engineering teams began lifting the wrecked Costa Concordia liner upright on Monday, the start of one of the most complex and costly maritime salvage operations ever attempted.

The vast hulk of the 114,500 tonne cruise liner has lain on its side for more than 20 months, dominating the tiny port in the Tuscan holiday island of Giglio where it hit rocks on Jan. 13, 2012, killing 32 people.

After a three-hour delay caused by an overnight storm which interrupted final preparations, salvage crews started the all-day operation at around 9.00 a.m. (0700 GMT)

In contrast to the accident, a catalogue of mishap and misjudgement over which the Concordia's captain Francesco Schettino faces multiple charges, the salvage operation has so far been a tightly coordinated engineering feat.

With a cost estimated so far at more than 600 million euros ($795 million), it is expected to be the most expensive maritime wreck recovery ever, accounting for more than half of an overall insurance loss of more than $1.1 billion.

A multinational team of 500 salvage engineers has been on the island for most of the past year, stabilising the wreck and preparing for the start of the lifting operation, which must be completed before the vessel can be towed away to be broken up.

The Costa Concordia, the length of three football pitches which can carry more than 4,000 passengers and crew, sank when rocks tore a huge gash in its hull after it came too close to shore at the start of a Mediterranean cruise.

Schettino has been charged with multiple counts of manslaughter and causing the wreck but the accident has also raised questions about the risks and costs of operating and insuring such vast ships.

Marine insurers who have to calculate the cost of covering a new breed of large cargo and cruise vessels will be watching the project on Giglio closely, well aware that any problems could have a significant impact on future insurance costs.

Engineers say they are confident the operation will be a success, although the process has never before been attempted under such difficult conditions on a vessel of this size.

"We have done parbuckling before but never on a location like this," Nick Sloane, the South African engineer coordinating the recovery for contractors Titan Salvage, told Reuters as the final preparations began.

"She is on the side of a mountain on the seabed, balanced on two reefs and she is a really large ship - she's three football fields long, a hundred thousand tonnes plus... So it's never been done on this scale," he said.

The operation is scheduled to take 10-12 hours with the most delicate phase expected at the beginning, when hydraulic pulleys begin to shift thousands of tonnes of metal off the rock bed.

Engineers have lifted the ship a few centimetres to detach the metal from the jagged rock spur but it is unclear how the damaged structure will react to being lifted upright.

A series of 11 towers with hydraulic mechanisms controlling 205-kg (450 lb) cables slung under the ship and attached to its side will slowly rotate the vessel until it is sitting on six specially built platforms drilled into the granite rock bed.

Eleven large tanks, the size of multistorey buildings, have been welded to the side of the Concordia that is out of the water to give leverage and buoyancy while two other tanks will act as a sort of "neck brace" to stabilise the ships' bow.

During the operation, crews will look for the bodies of crew member Russel Rebello and passenger Maria Grazia Trecarichi.

Once the ship is upright, salvage teams will spend a number of months stabilising it and preparing for it to be re-floated with the aid of additional giant buoyancy tanks before it is towed away for scrap, probably next spring.