ETA have put some arms beyond use say monitors

Basque separatist group ETA has put some of its arsenal of guns and explosives beyond use, an international group monitoring a ceasefire said, Spanish government calls on group to disband 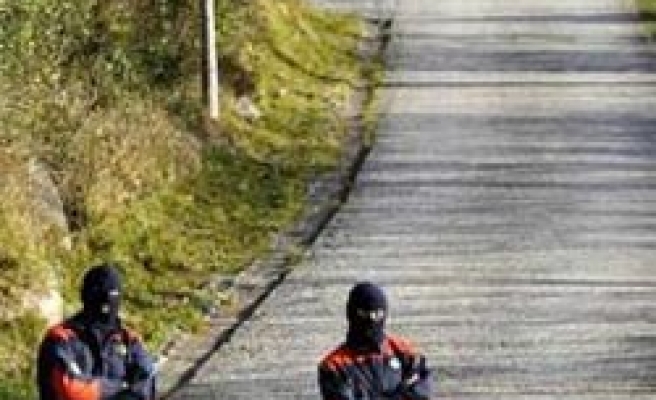 Armed Basque separatist group ETA has put some of its arsenal of guns and explosives beyond use, an international group monitoring a ceasefire said on Friday, but it was unclear how much of the weapons stockpile had been scrapped.

The move by the Basque group is similar to the decommissioning process in Northern Ireland, where nationalist and pro-British paramilitaries disposed of their weapons in front of independent witnesses as part of a peace deal.

"We have verified that ETA has put out of operative use a certain amount of arms and explosives," the head of the international commission, Ram Manikkalingam, told a news conference in the Basque region's main city of Bilbao.

"We believe this is a credible and significant step," said Manikkalingam in a short statement.

The commission showed journalists a three-page inventory of the weapons handed over, which included two rifles, two revolvers, 300 rounds of ammunition, two hand-grenades, 16 kg (35 lb) of chemicals for making explosives, a detonator cable and timers.

Manikkalingam said criticism that the cache was too small was unfounded considering the lack of open talks between ETA and the Spanish government.

"If it was under circumstances in which ETA was able to move freely and the government were fully cooperating, I would agree with that comment," that the take was small, Manikkalingam told Reuters in an interview after the statement.

"But this is under circumstances where ETA is not able to move freely and there is no cooperation from the government. So, given that situation, the amount is not small, it is quite considerable."

ETA announced a unilateral ceasefire two years ago, suspending four decades of attacks in which more than 800 people died. The group has been severely weakened by hundreds of arrests and flagging support in the region.

In 2012, ETA said it wanted talks with the Spanish and French governments to negotiate a definitive end to military operations and a handover of its arms.

But Spain's then newly-elected conservative government, led by the People's Party's (PP) Mariano Rajoy, rejected the offer and demanded ETA dissolve itself without conditions.

Interior Minister Jorge Fernandez Diaz welcomed the handing in of arms as positive, but said that if the group really wanted to disarm they could just give police the location of their arsenal, without needing international monitors.

"The only thing Spanish society wants is the definitive dissolution of ETA, without conditions and concessions. And that's what the state is working towards," said Fernandez Diaz.

ETA, formed in 1959 during the dictatorship of Francisco Franco to fight for Basque self-determination, said in 2011 it would work with international monitors led by Manikkalingam, a former advisor to the Sri Lankan government on negotiations with the now defunct Tamil Tiger separatist group.

Other commission members have worked on peace processes in South Africa, the former Yugoslavia and Northern Ireland.