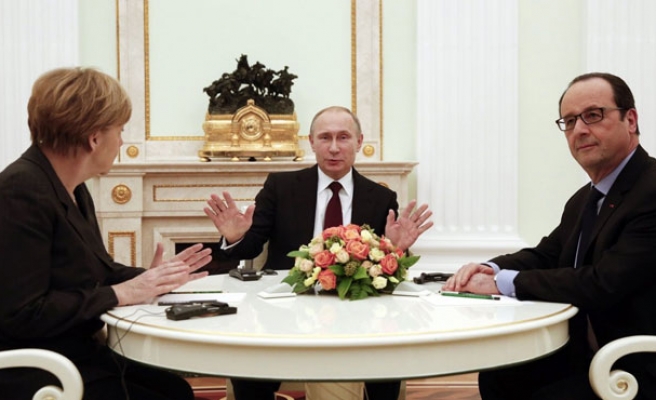 European Union foreign ministers lined up behind a Franco-German effort to end the Ukraine war on Monday but some said the EU must maintain sanctions on Russia until the situation in eastern Ukraine improved.

The leaders of Russia, Ukraine, Germany and France have agreed to meet in Belarus on Wednesday to try to broker a peace deal for Ukraine amid escalating violence there.

Foreign ministers arriving for an EU meeting welcomed the glimmer of hope for a deal following a new initiative by German Chancellor Angela Merkel and French President Francois Hollande. But some were sceptical that any ceasefire would stick.

The ministers had been due to adopt asset freezes and travel bans against a new list of Russian and Ukrainian people and organisations, led by Russian Deputy Defence Minister Anatoly Antonov.

Some EU officials said ministers may hold off from approving the new sanctions to avoid rocking the boat before the Minsk meeting, although others were adamant the extensions to the list would be approved on Monday.

Germany Foreign Minister Frank-Walter Steinmeier told reporters he hoped the Minsk meeting would lead to "first steps ... towards a ceasefire". He added: "But I want to say again that this isn't certain."

Foreign ministers crowded around Steinmeier and French Foreign Minister Laurent Fabius at the start of the meeting to hear the latest on the talks.

"I think what we will see today is complete backup of the initiative from Merkel and Hollande," said Swedish Foreign Minister Margot Wallstrom, stressing she wanted a political rather than military solution.

A peace deal would come as a relief to many EU countries that would rather avoid tightening sanctions on Russia, the EU's largest energy supplier, and harming their own economies.

But British Foreign Secretary Philip Hammond said the bloc must remain "clear and united in our stand against Russian aggression in Ukraine."

"Until we see Russia comply on the ground we cannot relieve the pressure in any way," he said.

Foreign Minister Linas Linkevicius of Lithuania sounded deeply sceptical about chances of a peace deal leading to improvements on the ground and said it would be "a logical move" for the United States to send weapons to the Ukrainian army.

"We all expect there will be a diplomatic solution, no-one wants war, but we can judge only on the developments on the ground, we cannot trust a single word of the Russian leadership," he said.